Hon Folks, it’s heartening to hear that the National Planning Commission (NPC) is hatching another vision for Malawi tentatively christened National Transformational 2063 which is deliberately aligned with the global Agenda 2063.

If Malawi shall remain corrupt, heavily indebted, environmentally degraded, technologically backward, politically volatile with very low GDP per capita and very low HDI rate, we shall definitely be less deserving of a good place in their memory.

I bet God will not be happy with us either. He’s blessed us with a beautiful country, fully endowed with what many other nations don’t have—rich fertile soils, Lake Malawi and Shire River which together run along the entire length of our country with so many tributaries in between. We alone have the Chambo and Mulanje Cedar.  We also have brains just like all others in the civilised world. There’s simply no excuse for failure to pass on a better country to future generations.

But the way to the future is via the past, or so they say. Put differently, you don’t repeat what led to a flop in the past and expect different results. The starting point in executing NT 2063 should be by embracing the six letter word CHANGE—looking back, see what did not work and fixing it by doing things differently.

Fortunately, we don’t even have to invent the wheel. The world is full of success stories to learn from. The real challenge is on carefully borrowing from the success of others what, in the parlance of celebrated Nigerian author Wole Soyinka, will help us “move forward, backward and sideward like a crab” when superimposed on what is our own.

But the real hurdle is accepting that change almost always dislodges some from their comfort zones. For example, in Rwanda, the interest of fostering greater unity in the wake of the 1994 genocide reportedly made government outlaw ethnicity to avert a repeat of the ethnic rivalries that resulted in the needless massacre of 800,000 people.

Changing or weakening ethnicity as a functional construct likely affected the status of traditional leaders or leaders of tribal groupings. They had to be dislodged from their comfort zones to achieve a greater national good!

The point I am making is that the success of NT 2063 hinges on change, not just of attitude as is often stressed but more so of how we are organised and how we do things the Malawian way. Obviously, for this to work the State President must be its champion-in-chief and other change agents should include leaders of the Legislature, Judiciary, NGOs, the faith community and traditional leaders.

Together, they must accept that change is necessary for us as a nation to move to a better place   and that the change we seek will dislodge some, if not many people, including themselves from their comfort zones.

Now, back to Vision 2020 which has the following statement on its dashboard:

“By the year 2020, Malawi as a God-fearing nation will be secure, democratically mature, environmentally sustainable, self-reliant with equal opportunities for and active participation by all, having social services, vibrant cultural and religious values and being a technologically driven middle-income economy.”

The year 2020 is now only six months away. What’s there to show for it?

Our population has grown by 35 percent from 13.02 million to 17.5 million in the past 10 years alone. Yet the economy has in the past two decades registered an average growth rate of 4.4 percent, according to Economist Thomas Munthali who heads the National Planning Commission. Are we sharing poverty or wealth? Economists are better poised to answer that question but I’ve heard it on good authority so many times before that unless we grow the economy by 6 percent or more, we are merely sharing poverty.

Then again we look at indebtedness. Our domestic and foreign debts are already equivalent to two national annual budgets. With the shoe-string budget we operate on, it’s likely that we’ll depend on more borrowing to finance our development.

Unfortunately, with rampant corruption estimated to be eroding 30 percent of public revenue, we’ll be spending on one project what it takes to spend on two or more projects. What kind of change will result in every penny being used for the intended purpose? That’s the question we should be asking going forward.

We could say the same about environmental sustainability. There are no trees along many river banks. Not even the catchment areas of the strategic Shire River are spared! Like armyworms we’ve combed down trees and other types of vegetation from our mountains and other hilly areas. To put a stop to all that and replenish what is already lost would require mooting and enforcing politically unpopular decisions.

Let me stop by saying let’s not wrap in chocolate our failures when assessing Vision 2020. It’s been a flop. Want to know why? We are fourth poorest by GDP per capita. We also have a low human development index (HDI) rating, yet we wanted to be a middle-income economy of milk and honey by 2020. I rest my case.

Growing into men without legs 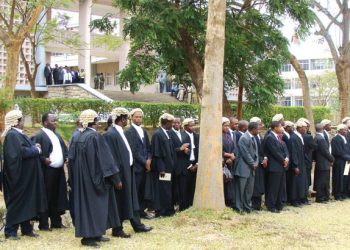 Growing into men without legs