Her diminutive stature can be deceiving, but Omega Mitinda is a rare combination of brains and beauty.

The Fourth Year biomedical engineering student at the Malawi University of Science and Technology (Must) has won an award for inventing a hearing aid. 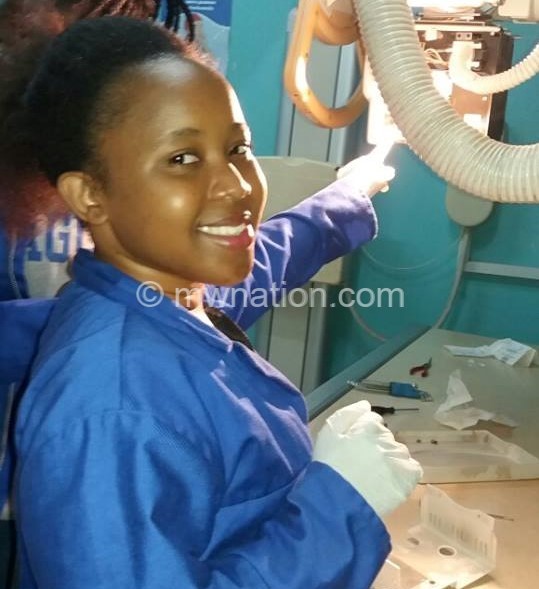 True to her growing brand of an engineering innovator, Omega is one of this year’s OBURA Euro-African design competition after her project on the design of a low cost hearing aid made it in the top 15 out of a pool of hundreds of entrants from across the globe.

The 21-year-old is among the few female students at Must, yet, that does not stop her from challenging the majority males into a duel of academics.

And so far, she is winning it, at least going by the number of awards she has won in her blossoming engineering career.

A previous winner of an international designing competition for biomedical engineers and Malawi Institution of Engineering (MIE) best female engineering student at Must, Omega has winning part of her life.

The accolade has since won her participation at the 2018 conference of biomedical engineers in Italy later in the year.

She had been known as one of the brightest stars in her class since her arrival at Must in 2014, but last year she proved that her innovation and creativity transcends Malawi’s borders.

Another design she worked on with a colleague won her a trip to a conference of biomedical engineers in Egypt.

In an interview, Omega, who is on internship at Malawi’s major referral, Queen Elizabeth Central Hospital (Qech) in Blantyre as part of her biomedical engineering training said the news about the award was very exciting and a dream come true for her.

“After attending the conference in Egypt, I was highly motivated and said to myself that I will compete again this year. The project addresses the hearing loss problem which mostly affects the elderly. The device I am designing is a portable behind-the-ear hearing aid with rechargeable battery accompanied by its solar charger. Most hearing aids on the market are expensive because they use non-rechargable batteries and on top of that they use sophisticated technology (software).

“I specifically designed the hearing aid to fit people from developing countries such as Malawi. The cost of producing it is affordable and the use of solar charger also solves the electrical problem that we are facing. The device batteries can charge using a single 5v solar cell,” said Omega.

On the future of the design, Omega said she and some of her classmates (Peter Mwambananji, Peter Amos and Erick Galeta) plan to produce the final product.

“I only came up with the design prototype which was made for demonstration purposes at the Polytechnic studio. I think that we can produce the final product in a short period of time, but funding is our only limitation,” she said.

If she gets the much needed financial support, Malawi could be on the world map as a producer of a very helpful and affordable hearing head.

This will be a dose of some fresh air for a country currently hitting headlines for all the wrong reasons.

According to Omega, once finalised, the product will assist many people with hearing loss problems, especially those that cannot afford modern hearing aids.

“It will restore people’s normal way of living [hearing is very important] and they will actively participate in the development of their families and the whole nation,” she explained.

The multi-award winning student also shared her secret to success.

“I believe that nothing comes for free, so, when I want to achieve a goal, I work my best towards it. I always tell myself that I can be whatever I want in life as long as I dedicate my time to it and pray for it. I don’t overestimate my abilities, yet, at the same time I don’t underestimate myself.

“My mum was my biggest motivation. She died some three years ago. She never made it to university, but she knew the importance of education and kept on encouraging me to work hard at school. At times, I really worked hard and passed with good grades just to make her happy. Now that she is no longer with us, my inspiration is my own life. I want to make a difference,” she said.

Much as Omega could not be drawn to talk about her future plans, she said since engineering requires people that are creative and problem solvers, she intends to solve problems in the medical field whenever an opportunity avails itself.

Talking about her experience at Qech, Omega said the internship is really helpful for students as they now know what society expects from them, the various areas they need to focus on and how important their courses are to the community.

She dismissed belief among many students that sciences are for males only, arguing that she is proof that females can equally perform well in these subjects.

“I think that is just a myth. There is nothing that differentiates males and females academically. Girls can even perform better if given enough support. What I noted is that sometimes girls are just lazy and because of that, they don’t want to put much effort in school,” said Omega.

She is the first born in a family of two girls. Her younger sister is in Form Three at Providence Girls Secondary School.

She was selected to Likuni Girls Secondary School where she graduated with 10 points and got selected to Must in 2014.