It was a low key opening for the Fourth Meeting of the 47th Session of Parliament yesterday with several legislators seeking to be seated elsewhere while others such as Mulanje West’s Patricia Kaliati were relegated to the back benches.

Unlike previous first days of meetings which would be beset with numerous points of order to the annoyance of the Speaker, there was order in the House. 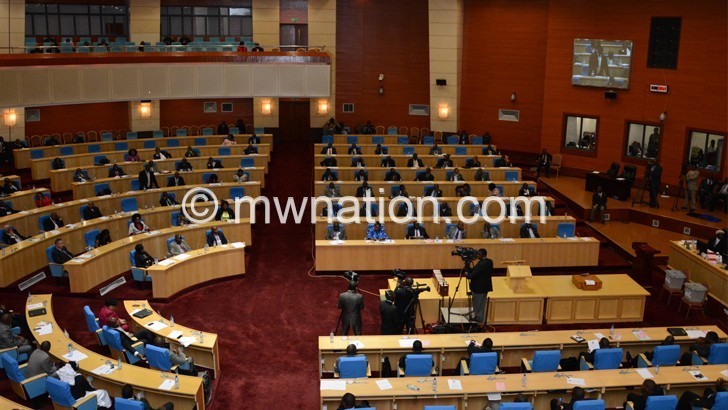 A moment of excitement emerged when a member of Parliament (MP) drew the attention of the House to what appeared to be smoke in the chamber.

But Speaker of the National Assembly Richard Msowoya brushed off the claims, saying it was vapour because the room was warmer after the air conditioning system was switched off.

Said the Speaker: “I see something as well, but I don’t think it is smoke. If you remember, the airconditioners were switched off and this could be the reason. However, let me ask Parliament staff to investigate and I will report back.”

However, Lilongwe South West MP Peter Chakhwantha (Malawi Congress Party-MCP), who raised the alarm, insisted there was a smoky smell in the air.

He said: “Some of us are asthmatic and this is not good for us.”

The Speaker later reported back that burning of stuff at the nearby Bingu International Convention Centre (Bicc) resulted in smoky air being drawn into the Parliament Building and the chamber.

While consultations were in progress, most of the legislators remained in their seats and debate continued on the ministerial statement by Minister of Health Atupele Muluzi.

Apart from Cabinet changes and paying respect to the six Malawi Defence Force (MDF) soldiers who died in a rebel ambush in the Democratic Republic of Congo last week, Msowoya also announced new seats for four MPs, among them former deputy minister of Defence Vincent Ghambi who has been relegated to the back of the government seats.

Kaliati, who is UTM interim secretary general, lost her seat close to the Cabinet ministers’ bench and now occupies seat 119, the last seat available on the government side.

But Kaliati, like many MPs on the government side, was not present in the House yesterday.

Nyalonje ditched PP for newly formed UTM that is promoting the presidential ticket of Vice-President Saulos Chilima in the May 21 2019 Tripartite Elections. She has moved from the front row to seat number 54.

Dzimbiri, who used to occupy a section reserved for independent MPs on the government side of the House, has asked to be allocated a seat on the opposition side instead.