by Ntchindi Meki
in Front Page, National News
5 min read
0
Share on FacebookShare on TwitterShare on WhatsAppShare on LinkedinLinkedinShare via Email

It is very easy for a person to walk into a medicine store and buy any drug from the counter without a prescription.

The only problem is that some drugstores are selling medicines beyond their mandate while some personnel manning drug stores and pharmacies have no medical background which poses a threat to lives, an official of the Pharmacy, Medicines and Poisons Board (PMPB)has said. 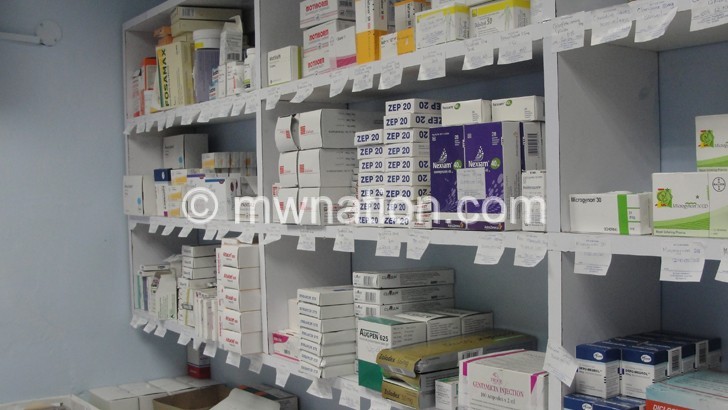 This week Weekend Nation investigated the malpractice by buying some of the prescription-only drugs in Lilongwe where we observed that the practice is happening on the watch of the board.

PMPB acting registrar Mphatso Kawaye on Thursday also admitted in a response to a questionnaire, the existence of the unprofessional conduct in the sector which he attributed to infrequent supervisions and inspections by both supervising pharmacists and the board’s inspectors.

The Pharmacy, Medicines and Poisons Board Act prohibits drugstores from stocking or selling prescription only drugs such as antibiotics and also requires them to be manned by qualified personnel. On the other hand, some pharmacies in the country which are allowed to stock and sell prescription only drugs are also not manned by qualified pharmacists.

“It has now become a tall order to deal with the challenges,” said Kawaye who attributed the problem to the fact that the culprits warn one another each time there is a monitoring exercise.

He said: “Another reason could be that medicine store owners receive pressure from clients who demand such medicines. But such demands may be made out of ignorance that the premises are not supposed to keep prescription only medicines or due to lack of alternatives especially in rural settings”.

We visited some drugstores in Lilongwe  and bought some prescription only drugs from open shelves while in other outlets, the shop attendants fished them out from the back rooms.

The situation was the same in drugstores we visited in Area 23, Kawale, Area 36 and Likuni Township in Lilongwe.

Kawaye , however, insisted that they conduct quarterly visits to the facilities but that the frequency of the inspections may be inadequate due to the high number of medicine stores—754 medicine stores, 87 retail pharmacies and 82 wholesale pharmacies in the country. “Because of the increase in the numbers of new applications for drug stores, coupled with the challenge in increased numbers of registered medicine stores as compared with the size of the PMPB, the board has (starting this financial year) instituted an administrative measure that involves restricting the approval of new applications,” he said.

The acting registrar said the board will be inspecting new applicants’ premises only three months in a year to free up time for its staff to monitor existing registered medicine stores and for the secretariat to vet new applications especially in relation to whether the health care worker who is to manage the medicine store is not working elsewhere.

Society of Medical Doctors (SMD) president Amos Nyaka in a telephone interview on Wednesday pointed out that the country is now faced with a rising number of drug resistant superbugs emanating from use of antibiotics, suggesting that how and where they are dispensed could be one reason for the problem.

Superbugs are bacteria that cause drug-resistant infections and can ultimately lead to death.

If the abuses are left unchecked, more people are likely to become drug resistant which has financial repercussions for the   economy, observed Nyaka.

The SMD president who is an eye specialist said he has ever handled cases of people who have lost their sight after taking wrong medication.

Said Nyaka: “No-one should be allowed to dispense any drugs without a prescription. In other countries no one can just walk into a medicine store or pharmacy and buy drugs, but here in Malawi we seem to be doing things our own way.”

A pharmacist at Kamuzu Central Hospital (KCH) who opted for anonymity observed that some unexplained deaths in the country are a result of poisoning that happens when a person is taking prescription only drugs and without following the right dosage.

He said: “People are hanging themselves these days; medicines are not sweets, if taken badly they kill, they become poisonous. For example, some people with conditions like BP (high blood pressure) are not allowed to take some medication but you find that such people resort to buying drugs from a counter and the results are fatal.”

Two months ago the Bureau of Investigative Journalism that partnered with international news outlet CNN broadcast a report on the crisis of superbugs in Malawi especially on newborn babies.

According to the findings of the CNN report, 90 percent of the Klebsiella bugs were resistant to the commonly available antibiotics in the country, from about 12 percent in 2003.

A neonatologist at Queen Elizabeth Central Hospital (QECH), Kondwani Kawaza, who CNN interviewed, explained that mothers are losing their babies to a potentially treatable condition.

Said Kawaza: “Some people think that antibiotics resistance is a hypothetical threat—a non-existent threat that only academics talk about. But for us, working here, we do see it every day. We do see babies change suddenly from a robustly active baby to a profoundly sick baby.”

Commenting on the issue Malawi Health Equity Network (Mhen) executive director George Jobe heaped the blame on PMPB for its failure control the situation despite having the necessary tools to take charge.

The board has done very little to nip such malpractices in the bud, he charged.

Jobe said: “As Mhen we have been lamenting about this issue that the regulator should intensify routine checks because some powerful drugs not allowed to be stocked by drugstores still find their way to outlets and endanger people’s lives.”

He also wondered why the board does not close down non-compliant facilities. “It is the whole reason we have the legislation.”

Another health activist Maziko Matemba observed that the growing trends are a manifestation that there are a lot of lapses in the regulation of systems.

For example, he questioned the logic to continue issuing licences to operators when the board does not have the capacity to monitor them.

Regulation Bill 2018, which is currently at Committee stage in Parliament.

The new Bill provides for an expansion of the regulatory functions of the board, and restructuring of the organisation to accommodate new staff establishment (especially inspectors) as well as to improve PMPB’s revenue stream.

The acting registrar also said the board feels let down by actions of drugstore owners who last year applied for a judicial review after some 37 medicine stores were closed due to non-compliance with regulatory requirements. According to Kawaye, the court action has significantly delayed the board’s monitoring exercises.