No Result
View All Result
Home Columns Word on the street

Politicians will not change MBC

This week, I received some views on the Malawi Broadcasting Corporation (MBC) scandal last week. The taxpayer-funded broadcaster aired comments with vulgar language aimed at the country’s State Vice-President Saulos Chilima, who is also leader of the UTM Party and running mate to opposition Malawi Congress Party (MCP) leader Lazarus Chakwera in the upcoming presidential election.

It is only fair that the guest writer takes over Word on the Streets this week. Here are his views:

Chakwera spoke well, but will he walk the talk?

“The problem at the state-funded MBC is a blister yet to burst.

The recent incident in which the public broadcaster published a screenshot with swearwords against Vice-President Saulos Chilima, is a warning for more rot from MBC studios.

We on the streets believe this is something we have always waited for and if nothing is done soon, the worst will come out of Kwacha.

MBC’s problems have and continue to worsen by day. Media ethics, objective journalism, individual responsibility, and even self-consciousness when making newsroom decisions were thrown to the dogs sometime back.

It has now reached a point that you can hardly distinguish some MBC journalists from politicians in power. Even the way some straight forward news stories are slanted along political lines, leaves one wondering if MBC really knows it belongs to the fourth estate community.

However, it must be noted that this problem has its roots dating from as far as the colonial era. The system of designing State media to complement government agenda was messed up big time that even when a new wind of transforming State media into public broadcasters blew across the continent, this biased system of news coverage had its roots grown too deep to be uprooted in a day. Nonetheless, some countries successfully reformed their State media into real public media serving the interests of the society.

In Malawi, MBC was reformed in 1998 to operate as a public broadcaster, but this is more on paper than in reality. As I have argued elsewhere, the tax-funded broadcaster has failed to reform in line with the laws and continues to churn-out the agenda of the ruling party even at a time the country is in a political crisis. Interestingly, the issue about how MBC should operate has been in the public domain for years. Even we, on the streets, have the basic knowledge of how best it should operate because our politicians always politicise the issue based on their interests. When in opposition, MBC is bad and when in power, MBC is a darling. That is how rotten our society has become.

However, we have had chances to change things at MBC, but it seems changing governors of the state and even empowering media watchdogs are no longer solutions to this problem.

We all saw how Malawi Communications Regulatory Authority (Macra) reacted to the recent MBC scandal. I am sure you read that statement signed by The Management. On the other hand, independent media watchdogs such as Media Institute of Southern Africa (Misa) Malawi Chapter and its sister organisations Media Council of Malawi (MCM) have demonstrated that they can only go as far as issuing statements that condemn malpractices in media.

At least other countries such as South Africa, their media council has the powers to sanction any media that does not subscribe to the good norms of journalism. It dictates how to apologize and for how long. If MBC was in South Africa, by now, it could be running a strip of an apology on its screens for a specified period.

We on the streets believe such kind of punishment sends a strong message to both the management and its boys. The weakness with sanctions in our system is that they fall short of appreciating the depth of the injury caused by the media malpractices.

The tragedy with ethics is that you can breach them and get fined, but the impact of the misconduct can haunt the victim forever. For instance, who will ever forget that one citizen used swearwords against Chilima?

It is high time we revisited our systems of sanctioning malpractices in media. We should think extra. 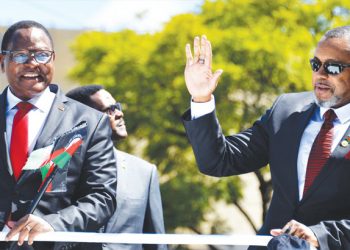 Chakwera spoke well, but will he walk the talk?