Politics is the problem, always

Member of Parliament for Dedza East Juliana Lunguzi posted a sentiment on Twitter this week which most Malawians would agree with in which she said “there are many causes of poverty in Malawi. One of which is politics.”

The standoff between Democratic Progressive Party (DPP) councillors and the district commissioner (DC) in Chiradzulu is an indication of the kind of politics that is prevalent in Malawi: the destructive and selfish type.

The events in Chiradzulu are a symptom of a bigger problem that happens at every level of administration in Malawi, be it at parastatals or Capital Hill.

This country has been let down by politicians who feel entitled to use public resources for personal or party use. It was rampant at the Electricity Supply Corporation of Malawi (Escom) and Agricultural Development and Marketing Corporation (Admarc) when 2 SC and 1 SC vehicles were used to ferry party supporters and dancers to party rallies.

For a long time, government departments have released vehicles and paid allowances to party women and drummers across the country just to attend functions and the practice has become so entrenched.

Is it any wonder that the Chiradzulu DPP councillors feel entitled to allowances and transport on a government vehicle to attend political functions? It is this spirit of entitlement inherent in politicians that is affecting development in councils and the DC should be applauded for refusing this to continue.

The DPP councillors are just a symptom of a bigger problem in the councils. They are taking it for granted that the district being home to three ministers is carte blanche to behave like savages. If the councillors want transport or allowances to attend meetings of these ministers and that of the political party which put them at the council, then they know who to approach.

To think that if councillors do not attend meetings of these so-called big-wigs will embarrass President Peter Mutharika is actually an embarrassment to the president that his people can stoop so low as to put the integrity of a party, already lacking that quality, at risk of scrutiny they really do not need right now.

What is there to be proud of that three ministers out of 18 in Mutharika’s cabinet originate from Chiradzulu? It just shows the level of nepotism and cronyism practiced in the DPP.

It is ludicrous to want the DC out of office because she did not deign to go kneel at the foot of the DPP district governor. In fact it was disrespectful of the governor to expect her to prostrate herself before a politician. After all, politicians do come and go but DCs as we all know just change districts to manage.

The district like many others are beset with problems too numerous to mention. The councillors should have been in the forefront finding solutions to the perennial inadequate water supply which has been a long-standing problem at Chiradzulu District Hospital rather than collecting cheques for contractors possibly identified by themselves.

The councillors should take a brief look at the 2015 Demographic Health Survey and perhaps then they will knock at the door of the DC with requests that actually benefit their voters rather than lining their pockets with resources meant for the majority of the people of Chiradzulu.

The DC should further be applauded for not bringing the gender card into this. Another woman would be tempted to think “is it because I am a woman?” with such unscrupulous undermining of her authority from predominantly male council leadership.

By standing her ground, the DC has demonstrated that she means business. Unfortunately, the destructive politics of this country do not allow for such strong-willed individuals. It will not be long before she is transferred from Chiradzulu, three months after her arrival

Malawi to benefit from WB $57 funding 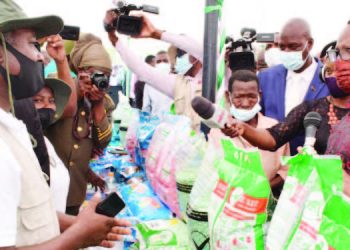