Many households who receive the benefits of social safety nets (SSNs) programmes do not satisfy the targeting criteria, while many who satisfy them do not benefit, the International Food Policy Research Institute (Ifpri) has said.

Jan Duchoslav and Edwin Kenamu, in a paper published recently titled Are social safety nets and input subsidies reaching the poor in Malawi?, said whether this is a consequence of misunderstanding of the criteria or one of deliberate non-adherence to the guidelines, a simplification of the criteria could remedy the situation by making them more comprehensible and easier to enforce.

They, however, observed that considering that in the case of Farm Input Subsidy Programme (Fisp), random assignment did not benefit the poor any less than deliberate targeting, it is unlikely that a simplification of targeting criteria would further impair the effectiveness of targeting compared to its current state.

According to the paper, data related to the Food Insecurity Response Plan (FIRP) and the Social Cash Transfer Programme (SCTP) suggests that this was at least partly due to poor adherence to targeting guidelines while data related to Fisp suggests that elites are less likely to capture the programmes when beneficiaries are selected at random rather than through community-based approaches.

“Transfer programmes targeted the poor more heavily than the rich, but still failed to exclusively target only the poorest segments of the population. In fact, the benefits of SSNs reach non-poor households as often as they reach poor and ultra-poor households combined.

“Input and employment subsidies, delivered primarily through Fisp and the Malawi Social Action Fund (Masaf), reached mainly the middle segments of the population in terms of wealth. It is likely that ultra-poor households were less likely to be reached by these programmes due to their labour constraints, while the non-poor were less likely to benefit because of lesser need. This seems to be the case regardless of the targeting approach,” reads the paper in part.

Analysis by Ifpri shows that the coverage of most SSNs increased between 2010/11 and 2016/17 from responses to bad harvests in 2015 and 2016, while that of the Fisp–by far the largest input subsidy programme in Malawi–declined.

Given the wide reach of Fisp in 2010/11, these trends led to an overall decrease in the percentage of households benefiting from at least one SSN or input subsidy program from 54 percent to 45 percent between 2010/11 and 2015/16. However, coverage of SSN programmes themselves (excluding FISP) increased from 17 to 36 percent of households.

In its Malawi Economic Monitor titled Realising Safety Net’s Potential, the Bretton Wood institution said there is evidence showing that social safety nets are making a substantial contribution in the fight against poverty.

Minister of Finance, Economic Planning and Development Goodall Gondwe is on record as having said that in the 2018/19 financial year; most of the projects in the agriculture sector will focus on irrigation to move the country from dependence on rain-fed agriculture to ensure resilience in the country’s economic growth as well as poverty reduction. 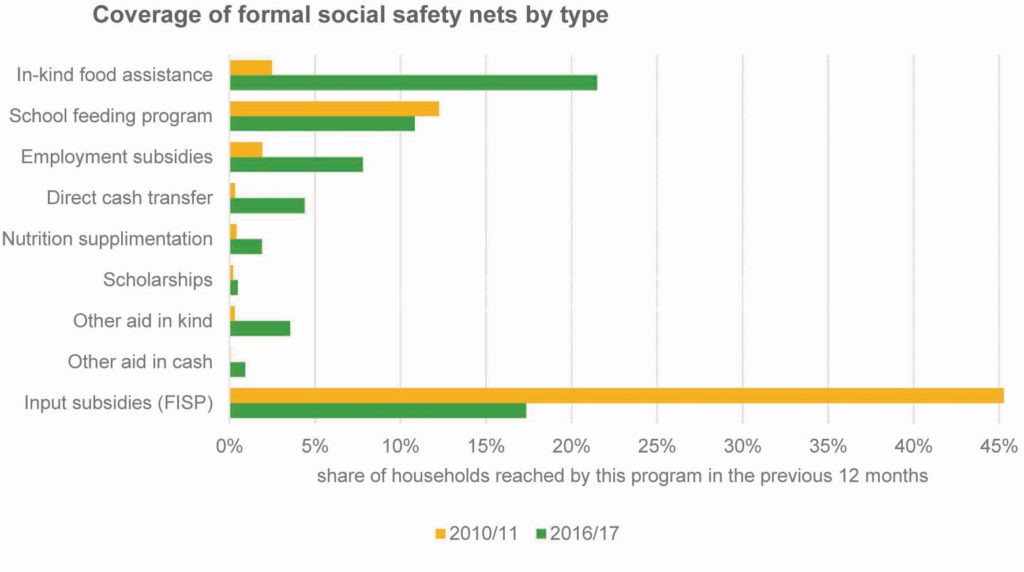 Sorting out long walks to school