Port Herald project was such a waste

Get rid of blue camp tactics in alliance

Marita Chimbeki: My lord, I want to draw your attention to how taxpayers’ money went down the drain in the Port Herald Inland Project. The population was sold a dummy that erection of such an infrastructure would herald economic transformation whose epicentre was the lower Shire town of Port Herald itself.

My lord, I still remember how land all of sudden became an expensive commodity in Port Herald as companies, organisations and business moguls scrambled for the salty patches of land sandwiched somewhere between the river and the port.

The area was projected to even have an international airport that could connect Port Herald to the rest of the world but despite the fanfare that followed the inauguration, Port Herald lies abandoned with the concrete structure that was deemed the port symbolically lying like a giant tombstone that cost taxpayers $20 million.

But despite the significant partner in the project, Mozambique, stating on numerous occasions that it did look at the waterway as commercially navigable and the project as viable, government continued to allocate more funds to the project in its national budget.

My lord, just imagine that in the 2010/11 national budget K97 million was allocated for meetings, negotiations with various stakeholders and supervision of civil works.

In the 2009/10 budget K150 million was allocated for conducting a hydrographic survey, something that was also funded in the 2008/09 budget to the tune of K120 million.

My lord, this is just a tip of iceberg on how taxpayers’ money has been wasted yet it could have made a big difference were it allocated to sectors badly in need of funds.

Imagine throwing billions of kwacha on mortar and quarry to erect a platform that is now being used as a venue for holding weddings; what a waste?

It is for this reason that my office wants controlling officers at ministries of Transport and Public Works to face the law for wasting public funds on a project that ceased making sense the moment Mozambique rebuffed us.

The ministers responsible for these two have also to face the law for misleading government into spending such billions. We cannot sue the dead; hence, this court will also direct us on the other party that is liable in this matter. I rest my case, my lord.

Mbadwa: I have keenly followed submissions from the Ombudswoman in this matter and this court agrees with her that controlling officers have a duty to ensure that taxpayers’ money is put to good use. The Port Herald Project might have looked impressive on paper but it was a white elephant that the country forced upon itself to look relevant in the region. I hereby grant leave to start proceedings against the controlling officers and responsible ministers for mishandling the project.

I give them a week to appeal against this order if they are not satisfied. n

My man loves me, but is not proposing

Get rid of blue camp tactics in alliance 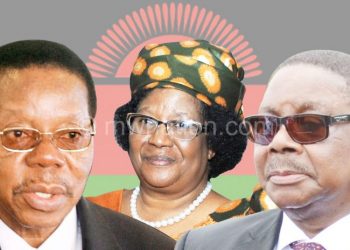