For the first time since Kamuzu Banda’s one-party regime, a Cabinet has been officially announced without a Vice-President.

Not by mistake, but design, Kamuzu Banda ruled this country for 31 years without a deputy. He was a paranoid dictator; his fearing a ready replacement was understandable, for lack of a better phrase. 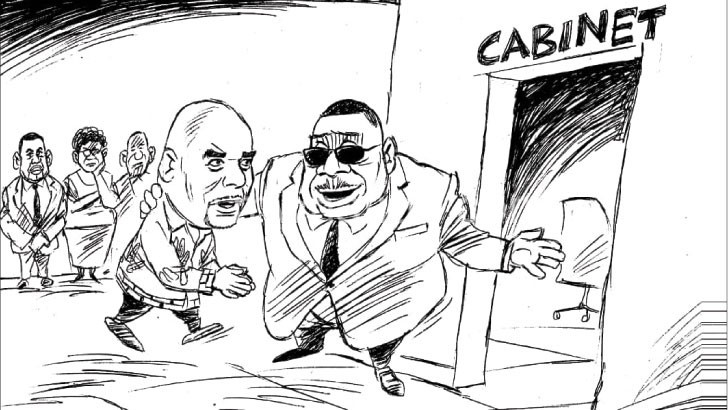 His loathing for a deputy, seems like a ghost that has haunted the office of the Vice-President once it was created in the 1994 Constitution.

After failing to disguise their fallout for a while, Chilima eventually dumped the ruling Democratic Progressive Party (DPP) to form opposition United Transformation Movement (UTM) which will challenge for the presidency in next year’s polls.

Once it reached this point, it always raised questions into how the two would cooperate in Cabinet. We now have an idea of APM’s suggested solution.

By omitting Chilima from Cabinet, as well as rewarding Charles Mchacha, the opposition’s ridiculer-in-chief, with a Cabinet position, the President has further sent a clear message.

The message is, we reckon, Mutharika will use his prerogative to appoint people into Cabinet to settle cheap political scores—even at the expense of the Constitution.

By elevating Mchacha, Mutharika is also embracing bigotry and taking hooliganism from the periphery of party governor’s office to the centre of his government.

Never mind, the man who has threatened people from protesting against Mutharika’s government, will now be in charge of the police!

And you don’t have to be Edge Kanyongolo to know that omitting a sitting Vice-President from the Cabinet was always going to be more than a controversial political gesture.

While Mutharika, himself a constitutional lawyer, must have aimed to get one over his rebellious younger deputy, announcing a Cabinet without an elected Vice-President is tantamount, in this newspaperman’s layman reading of the law, to opening up a legal conundrum.

Look at Section 91 (1) of the constitution. It reads: “There shall be a cabinet consisting of President, Vice-President, Deputy Vice-President, Ministers and Deputy Ministers, as may from time to time appointed by the President.”

You really don’t have to be a legal ‘gearbox’ to figure out that while the Cabinet is appointed by the President, there are two positions whose members are a permanent Cabinet presence.

Bar incapacitation or impeachment, the President and Vice-President shall always be part of Cabinet. It doesn’t matter whether they like each other or not; it’s a marriage without easy divorce, unless as stipulated by the law.

Granted, Chilima’s decision to dump the DPP—without resigning from his official position—is to blame for all this.

Indeed, as observed by many people, including the DPP, Chilima’s continued holding of the Vice-Presidency smacks of hypocrisy by the former corporate executive.

The reality is, though, this is not a matter of morality (of which our politicians cares less anyway) but a matter of law. And the law says neither Chilima nor Mutharika can be fired from Cabinet.

Naming a Cabinet without a Vice-President, in our untrained layman’s perspective, violates the Constitution. It is one prerogative the President doesn’t have.

Whether this move is also tantamount to dismissing the Vice-President from his office, is something our courts can later wade on, but, in our uncensored worldview, this move is illegal.

But breaking the Constitution is not something this President appears nervous doing. There are several occasions Mutharika has been reported to have broken the law.

And you can also effectively undermine rule of law by appointing Deputy Police Minister a man who promotes violence and insults women—sometimes even in front of their husbands who happen to belong to his own party.

The message being sent here by Mutharika, to friends and foes, rivals and allies, is that as President, he deems his powers—among them the prerogative to hire and fire—as a licence to do as he pleases.

And that he is ready to appoint people for political expediency and risk a constitutional crisis for the same reason.

But as anyone with the most rudimentary understanding of the law would tell you, power in a democracy belongs to the people—politicians just hold it on trust. Anything contrary, was buried in the political grave that swallowed Kamuzu Banda’s autocracy.

Can’t I just be friends with him without sex?

Can’t I just be friends with him without sex?