The Malawi Human Rights Commission (MHRC) says overcrowding and the mixing of convicts and prisoners on remand is affecting efforts to ensure that inmates are kept under dignified conditions in the country’s correctional facilities.

MHRC executive director David Nungu said this yesterday following a survey report by the Centre for Human Rights Advice and Assistance (Chreaa) which suggests that the Prison Department is failing to uphold its legal mandate to keep the two groups of inmates separate. 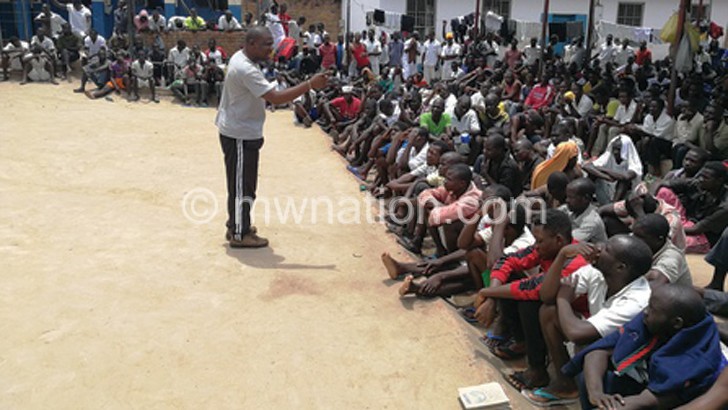 In a telephone interview, Nungu said: “The basic rule of separation suggests that convicted prisoners and those on remand should not be mixed. The same applies to child offenders and adults.

“In our prison monitoring programmes, we have established that the problem of space in prisons is quiet huge. But the bottom line is that failure by the State to uphold humane standards in prisons is a violation of human rights protocols both locally and internationally.”

He also said overcrowding in the country’s prisons has led to a myriad of other problems such as insufficient food, lack of health care and educational facilities.

Section 64 (2) of the Prisons Act charges the Malawi Prison Service (MPS) to separate prisoners from non-convicts, including some categories with special needs and those susceptible to abuse such as those suspected or certified to be of unsound mind.

And according to the survey report which covered the period between March and August this year, some inmates who were found with mental health disorders at Chichiri and Bvumbwe prisons were found among a larger group of prisoners.

In part, the Chreaa report reads: ‘Section 42 (2) (d) of the Constitution of Malawi obligates the State through the Malawi Prison Services, since incarceration of prisoners is under their powers, to separate convicts with remand prisoners when in their custody. It is believed that the framers of the Constitution wanted to abolish the tendency whereby hard-core criminals groom minor offenders because of the mixture or contact and,therefore, called for separation of convicts and non-convicts and categorising of prisoners in prisons according to offences they committed.’

The country’s prisons were designed to hold 5 000 inmates but are now home to 13 000 inmates. Efforts to increase space by constructing modern prisons in Lilongwe and Mzimba districts have been met with funding challenges.

Prisons Inspectorate chairperson Justice Kenan Manda in a telephone interview emphasised the need for government to observe the separation of various categories of offenders, saying it facilitates the rehabilitation of prisoners.

“At the inspectorate we are not aware of any other plans to change the status quo apart from the construction of new correctional facilities which are moving at a snail pace. As a voice of consciousness, we insist that there must be separation of offender categories.

He said this is an internationally accepted principle that seeks to facilitate rehabilitation of first time offenders by not exposing them to influences of habitual offenders.