The Reserve Bank of Malawi (RBM) has downplayed fears of a possible depreciation of the kwacha in the face of weak Foreign Direct Investment (FDI) and election-related spending, saying the bank has sound policies to maintain the stability.

In an interview yesterday, RBM spokesperson Mbane Ngwira said the central bank has policies to ensure that the stability of the kwacha is maintained in the wake of the expected fears. 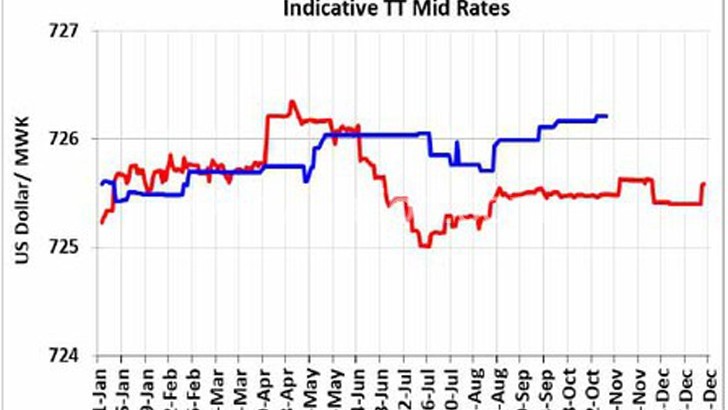 He said RBM is positive that the economy will not experience instability in foreign exchange availability or depreciation of the local unit, which has largely been stable for the past 24 months.

Ngwira was speaking in the context of a monthly report by Blantyre-based investment advisory firm Nico Asset Managers Limited which  fears that weak FDI and the upcoming expenditures that could accrue in the run-up to the May 21 2019 Tripartite Elections may negatively affect the exchange rate stability and cause the kwacha to depreciate in the medium to long-term.

He said RBM has the capacity to enhance its open market operations and sound monetary policy stance.

For close to two years now, the kwacha has remained stable, mostly against the dollar, due to what the central bank has attributed to fiscal discipline and efforts by monetary authorities to absorb excess liquidity from the banking system as well as maintenance of positive real interest rates.

But in its monthly economic review, Nico Asset Managers said: “It is expected that the kwacha will remain stable in the short-term due to continued availability of foreign exchange reserves, which are adequate to guard against the kwacha volatility.

“But as the 2018 tobacco marketing season begins to close, it is anticipated that this will negatively affect the inflow of foreign exchange reserves thus impacting the kwacha’s value.”

But Ngwira said for a while now, the central bank has observed that demand for foreign exchange on the market has been matched by supply.

He said: “We are under a strict [International Monetary Fund] Extended Credit Facility programme with strict targets on foreign exchange reserves, liquidity, credit to government among others.

“To be in the [ECF] programme, we have to meet those targets and we are working towards this.”

Figures show that Malawi’s FDI has been fluctuating in the recent past despite various interventions to increase the inflows.

United Nations Conference on Trade and Development (Unctad) figures indicate that FDI’s to Malawi currently stand at $277 million (K203 billion) which is by far the lowest level of FDI in Africa.