The Malawi Growth and Development Strategy (MGDS) III aspirations were this week put on the spotlight following revelations from the International Trade Index on Trade Map that the country’s imports are declining.

The index observes that Malawi’s imports from the rest of Africa declined over the past five years, at a time exports are also declining. 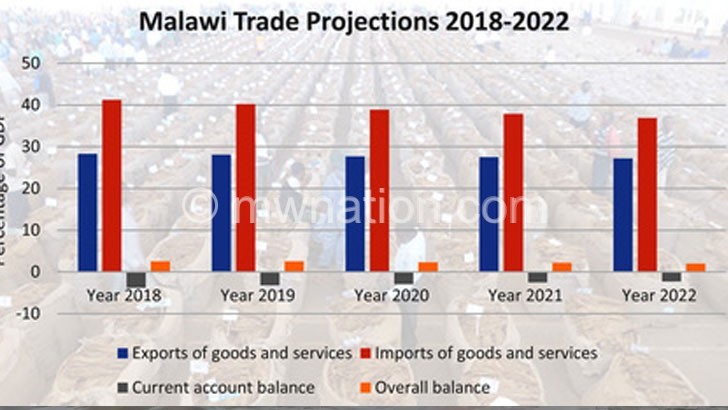 MGDS III sees Malawi narrowing its trade balance in the next five years by 0.5 percentage points to two percent of gross domestic product (GDP) in 2022 from 2.5 percent in 2018.

Ministry of Industry, Trade and Tourism spokesperson Wiskes admits that Malawi is still importing more than it exports, with the trade balance in 2022 projected to stand at 9.7 percent of GDP.

Finance and corporate governance expert James Kamwachale Khomba, who is also a lecturer at the Polytechnic, said there is need to make radical changes in the economy to enable the country to progress socio-economically to change the status quo.

“As a nation, we should be planning for an aggressive import substitution programming through massive industrialisation of our local manufacturing companies.

“There are some commodities that we can easily produce here, thereby substituting those that we import such as toothpicks, corn flakes, shoes, textiles, biscuits, soap, crisps, chemicals, and medicines,” he said.

Chancellor College economics professor Ben Kaluwa, however, said it is a difficult task to narrow the trade gap if Malawi does not think outside the box.

“We are failing to make strides on the export market because we depend on primary commodities for exports. The danger with these primary commodities is that consumption does not double in most cases even if incomes in the affected areas double,” he said.

On his part, Economics Association of Malawi (Ecama) executive director Maleka Thula said the trend is expected as Malawi imports some strategic goods every year such as fertiliser for agriculture production, pharmaceuticals and fuel.

Malawi’s trade balance has been widening over the years despite various policy interventions to narrow the trade deficit—a negative balance of trade in which a country’s imports exceed its exports.

This is despite having policies, strategies and efforts to implement programmes in several key areas in support of trade, industry and the private sector, including the draft private sector strategy, National Investment Policy, National Export Strategy (NES), an updated micro small and medium enterprise (MSME) policy and the Buy Malawi Strategy.

With Malawi being a high cost country on doing business; it reduces competitiveness of local products on the international market, which leaves other economies to take advantage of the situation.

Malawi is an agricultural based economy, as such, agricultural products continue to dominate Malawi’s export basket.