A young graduate is going against the odds to make agribusiness trendy. JAMES CHAVULA writes.

She is a journalist, trained to tell untold stories of newsworthy people, places and happenings. Born in 1982, Rose Chisowa is shattering the mould to write her own story without newsroom experience.

“One day, I will write a book. Surely, I will one day share the journey to success. No shortcuts. Hard work pays off,” reads a July 28 post on Facebook where Chisowa’s exceptional offerings are trending and selling like hot cakes. Not only does she dare to think and act, but goes confidently in the direction of her dream.

The setting of her narrative is a remote farm at Nsundwe on the outskirts of Lilongwe. The characters include chicken and pigs. But it is not an adaptation of George Orwell’s famous fable Animal Farm which she encountered during her media studies at the Polytechnic. It’s actually Rose Farm, a shift from the bachelor of arts degree in journalism she obtained in 2008 to unlocking her potential for agribusiness—a murky industry where the majority of young Malawians fear to tread.

“It all started in 2010, when I bought a piece of land and I didn’t know what to do with it. So, I grew maize, soya and groundnuts. Three years later, I ventured into piggery with only four sows that multiplied to 46 in a year.”

The agri-business entrepreneur reportedly started with savings in anticipation for the expiry of her three-year contract with UbunthuNet Alliance for Research and Education, but the drabs became droves when she embarked on a small-scale cross-border business that took her to Mozambique, Tanzania and South Africa.

She admittedly did not need million to start up.

She decidedly bade farewell to white-collar jobs in 2013, devoting herself to commercial farming.

“I sold the piglets a few months after dedicating myself to the business and ploughed part of the earnings into expanding the business. I took on board goats as well as chickens.”

Now, the University of Malawi (Unima) graduate sweats it out unlike many of her age—including the classmates all over the news industry and communications business.

Neither did she study journalism by chance nor did she fail. It was her choice and remains vital to her way of life.

Global population trends favour youth involvement in national economics. Presently, the continent is confronted with a ballooning youthful population and countries are exploring ways to turn this into building blocks of their economies, not a burden.

According to the International Labour Organisation (ILO), almost one in four Malawians aged 15-34 are jobless.

At Rose Farm, Chisowa believes investing in agriculture will free the economy from the pressure exerted by the prevailing shortage of job opportunities and skills development for the growing youthful population.

“I decided I must do my part,” she says.

Chisowa sounds contented. Her enthusiasm makes hearers wonder why many young citizens shun agricultural events—often restricting themselves to observing. As the youth increasingly flee rural settings for urban areas in search for better opportunities, agriculture is dominated by elderly villagers struggling with hoes for subsistence.

Mzimba North Member of Parliament Agnes Nyalonje highlighted this gap when she donated seed for winter cropping to farmers rising from effects of prolonged dry spells that have reduced the country’s maize yield by almost 30 bags in every 100.

“Where are the youth? We have grown up being told that Malawi is an agricultural economy, but what are we doing to improve youth participation? We cannot continue this way if we are serious about growing the country,” Nyalonje said.

There are very few no-go zones for Chisowa’s income generation.

“By the way, who says agriculture is for old people?” she asks. “Confining agriculture to the old guard is counterproductive. That is why it never changes the lives of people though it is the backbone of our economy.”

To her, entrepreneurship is about patience, innovation, priorities and discipline. The long and winding race to the bank begins on a muddy note.

“Yes, I get dirty inside the farm, but I will prove you wrong when we meet outside,” Chisowa explains.

Her peers seek jobs, but she creates employment in her unique way.

“We all work for money. We all use the same money, but what differs is how we earn it,” she argues.

It is no secret that poverty pushes girls into risky sexual behaviour that fuels early marriages, teen pregnancies and sexually transmitted infections, including HIV and Aids. With slightly over one in 10 Malawians living with the virus which causes Aids, the country is the worst hit by early marriages in the Sadc region. In 2014, the United Nations reported that 50 out of 100 women marry before their 18th birthday.

The Demographic Health Survey (DHS) shows one in four girls get pregnant before reaching the marriageable age of 18, a high rate of teen pregnancy that partly compels thousands of female learners to quit school for marriage and sex work.

But the brains behind Rose Farm offers the dropouts and teen mothers a good example of what UNFPA assistant country representative Dorothy Nyasulu calls “the power of education”.

“Keeping girls in school delays childbirth. It liberates them to choose when to marry, when to get pregnant and how many children they want. Educated women tend to have fewer children than school dropouts,” says Nyasulu.

The country’s fertility rate, which population specialists find way too high for the fragile economy, means a girl is likely to have an average of six children in her lifetime.

At 32, Chisowa is still single. No baby. Only a growing business.

“There is money in agribusiness. I don’t miss anything at all. I am able to pay rent, feed myself, clothes, myself and help my family. I don’t care what people say when they see me washing the pigs. I am much better off than most of my friends in air-conditioned offices,” the young entrepreneur says.

Meanwhile, she is constructing permanent buildings with bricks, cement and iron sheets to replace grass-thatched huts that once riled one bank to deny Rose Farm a business loan. The solo affair, a micro-financer rejected, is creating jobs for needy villagers in the vicinity. Farcically, she quotes the lending institution’s personnel telling her: “We cannot give you a loan because animal farming is risky. What if the animals perish?”

The animals have not perished. They are multiplying, churning out manure and money.

This month she put the broilers on sale at K2 400 each, offering a free tray of eggs to those who buy 10 chickens.

There were 900 meat chicken at Rose Farm last month. Look at the price tag again and it will read about K2.2 million in the bank. This is no small change for the emerging agribusiness personality striving to unlock her potential.

“In fact, I am becoming popular in the capital because of the business,” she says.

In 2014, the growing popularity of the seller of eggs, pork, piglets, goat meat as well as chicken catapulted her to the Young Innovative Farmers Fair at Nature Sanctuary in Lilongwe.

On August 2, she was on the plane to Durban, South Africa, to attend a Youth in Agriculture Summit for Southern Africa aimed at unlocking agribusiness for the increasing young population in the sub-region.

On the flight, she took on board Felix Denis’ How to Get Rich with her. Execution is the keyword. Rose Farm partly mirrors the dream of her ambitious father whom she emulates and wants to surpass. Until his death in 2008, the Bunda College of Agriculture accountant used to supplement the family’s income with tobacco farming and poultry.

Inspired by Denis entrepreneurship book, the journalist learning on the lucrative ‘dirty job’ says: “If you never have a single idea in your life, but become skilled in executing the great ideas of others, you can succeed beyond your wildest dreams.”

In her business, nothing is done until it is done. 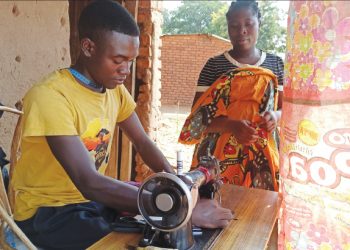