The committee, headed by FAM vice-president James Mwenda, made the recommendation after its meeting held on Saturday, after noting that some professional players have in the past been left out of the Belgian’s squad. 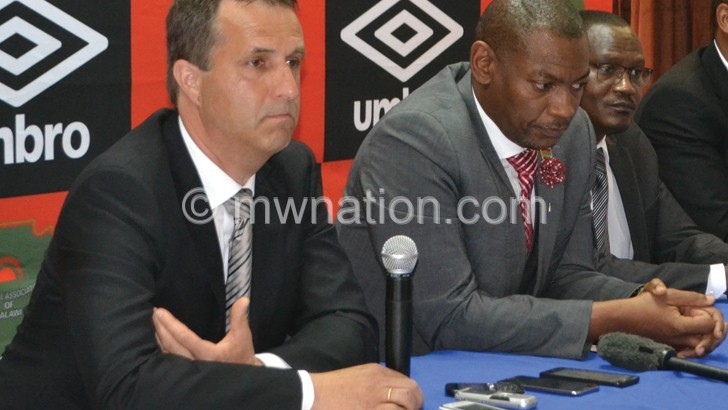 During the meeting, RVG submitted a report on the team’s performance at the recent Cosafa Cup in South Africa where Malawi was once again knocked out in the group stages after one loss and two draws.

“It was a normal subcommittee meeting which we always have. There were reports from all national team activities such as the Under-20 and the Flames,” said Mwenda.

RVG also submitted a plan of activities from now to September when Malawi faces Morocco in the Afcon qualifier and Mwenda said they have asked the coach, to cast the net wider when calling the squad for the tough Afcon qualifier.

He said: “We have asked the coach to ensure that he includes all our top players in the squad considering that we will be meeting one of the best teams in Africa. We have seen how Morocco played at the World Cup. They are good in all departments.

“We saw how they only conceded in the dying minutes in their first game and even came back stronger in their game against Spain whom they managed to hold. We, therefore, cannot afford to play without out top players. We have asked the coach to cast the net wider,” he said.

RVG has in the recent assignments dropped key players such as South Africa-based Gerald Phiri Jnr and Robert Ng’ambi who snubbed RVG’s earlier call up.

Captain Limbikani Mzava also excused himself from the Cosafa Cup while Gabadinho Mhango and Atusaye Nyondo were nursing injuries.

However, Mwenda did not specify which players the subcommittee was referring to, saying it is the prerogative of the coach to pick players.

“We cannot tell the coach specifically, which players he should pick, but what we are saying is we need all our top players for the game against Morocco,” he said.

On the Flames’ performance at Cosafa, Mwenda said the committee has asked the coach to come up with short and long-term solutions to the team’s misfiring up front.

“We were all disappointed with the performance at Cosafa Cup. The main problem is that the team is not scoring goals. We are playing good football, but football is about scoring goals. The committee noted that there is need to find a solution because this problem starts at club level and is manifested at the national team.

“We have asked the coach to engage all stakeholders such as Super League clubs on how best to solve this problem as a long-term solution while also working with the strikers at national team as a short-term solution,” he said.

RVG was not available of comment but after he Cosafa Cup, the coach indicated that he needs all professional players for the Morocco qualifier.