SA recession: Why should we care?

The South African economy has slipped into a recession during the second quarter of 2018, shrinking by 0.7 percent, a development that brings mixed fortunes for Malawi’s economy.

A local investment analyst said in an interview yesterday the implication will be felt in the further weakening of the rand against the kwacha, resulting in cheaper imports from Malawi’s major trading partner. 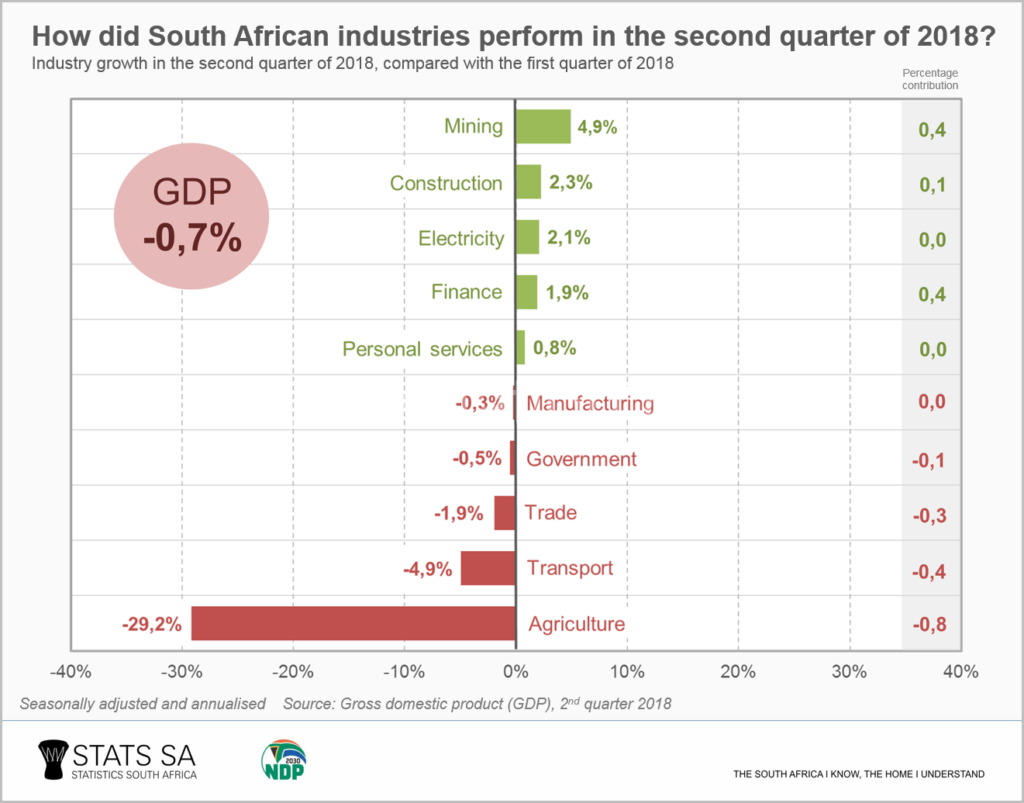 “The technical recession in South Africa will probably be a little more positive for us because imports will be cheaper. As you have seen, over the past months, the rand has been weakening against other currencies, including the kwacha,” he said.

But the analyst, who did not want to be named because of the nature of his job, expressed caution, saying it is too early to assess the implications.

The analyst said there is need to observe how the South African government will respond to the situation.

He said: “Could this recession be a short-term blip or it will prolong to the next quarter?”

The latest recession, according to Statistics South Africa, followed a revised 2.6 percent contraction quarter-on-quarter in the first quarter of 2018.

But University of Malawi’s Chancellor College economics professor Ben Kaluwa earlier said if the recession in SA prolongs, it could affect demand for the country’s goods and services, thereby affecting trade.

“SA is Malawi’s major trading partner, which means if there are problems there, trade could in one way or the other be affected,” he said.

With the rand continuing to weaken against the kwacha, Malawi Confederation of Chambers of Commerce and Industry (MCCCI) director of business environment and policy advocacy Madalitso Kazembe earlier said a weak rand is good news for local businesses.

“If the rand depression prolongs, there is a possibility of a widening trade deficit since Malawi is a net importer and has a narrow export base.

Last year, Malawi’s exports to SA stood at $82.5 million (about K60 billion) while imports were recorded at $487 million (about K355.5 billion), according to the National Statistical Office.

The 0.7 percent downturn in Q2 in SA was a result of a fall-off in activity in the agriculture, transport, trade, government and manufacturing industries.

Agriculture production fell by 29.2 percent in Q2, following a 33.6 percent slump in the first quarter,  largely driven by a decline in the production of field crops and horticultural products, according to Statistics South Africa.

The transport industry contracted by 4.9 percent, largely due to decreased activity in both land and air transport while the trade industry experienced its second consecutive quarter of negative growth, falling by 1.9 percent.

Government activity also decreased by 0.5 percent, largely due to falling employment numbers in the civil service while manufacturing, which fell by 0.3 percent, was the third industry to record a second consecutive quarter of negative growth, following in the footsteps of agriculture and trade.

On the other hand, mining, construction, electricity, finance and personal services experienced positive growth, but not enough to lift overall economic growth out of negative territory.