by Mike Van Kamande
in Editors Pick, National News
2 min read
0
Share on FacebookShare on TwitterShare on WhatsAppShare on LinkedinLinkedinShare via Email

People in Balaka, predominantly women and girls, are on the receiving end of the water scarcity to the extent of endangering their lives.

Agnes Zachariah, 52, from Nkaya Village in Traditional Authority (T/A) Nkaya, Balaka is down in the dumps.

She has spent four months guarding her pregnant daughter and earned herself the position of chairperson for guardians at Balaka District Hospital.

“Life at the hospital is a daily struggle because of water shortage,” Zachariah notes.

She says the water situation is so dehumanising that patients have to scramble for one pit-latrine and bathroom at the guardians’ shelter. 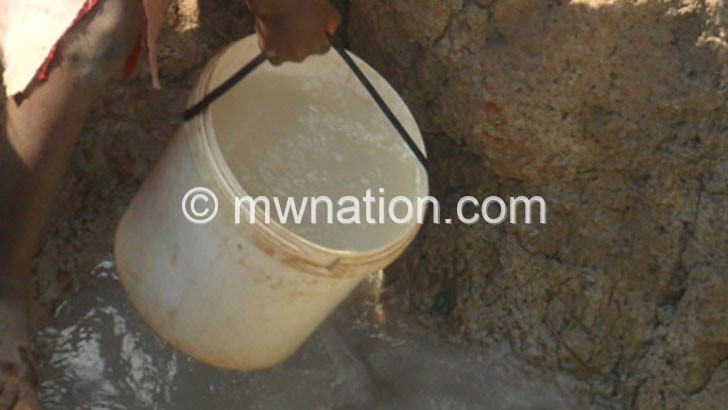 “We use power-driven pumps to thrust water into tanks, but because of the persistent blackouts, operations have been affected,” he says.

But the hospital situation is just a tip of the iceberg.

Mary Phiri (not real name), 19, nearly yielded to sexual advances from a 56-year-old who owns a shallow well nearby.

She says many women desperate for water have succumbed to such advances to access water.

“Even guards in schools with boreholes take advantage of desperate women by enticing them with sex to beat long queues,” she says.

Phiri adds that the distance women travel in search of potable water makes them vulnerable to more sexual exploitation.

But Gladys Malamba, councillor to group village head (GVH) Ntonya says some women and girls take advantage of the water situation to indulge in immoral behaviour.

“They engage in sin under the guise of looking for water, thereby, risking contracting HIV,” Malamba says.

She observes that girls should not be allowed to go to search for water at night without escort as that will give rise to teenage pregnancies and the spread of sexually transmitted diseases.

It is now the rural people in Balaka, Ntcheu, Neno, and Mangochi that are suffering the most.

They have had no water since July 25.

Speaking during handover of Liwinza Bridge in Ntcheu recently, GVH Senzani said there is only one borehole in Chinamvuwu Village.

“Mpira Dam made life simpler, but since the taps went dry, life has been tough, with women travelling long distances in search of water,” he says.

He adds that girls are missing classes because of that.

“Water is life and its sad women and girls spend a lot of time searching for it instead of attending classes or engaging in business,” Jimu says.