When President Peter Mutharika came into power in 2014 Malawians expected a development agenda which would improve their lives. However, it came out that Mutharika had a different agenda.  He could only talk about development without much implementation. This is why people blamed him for empty promises. It did not take long for people to realise that Mutharika’s administration was not bringing much change.

Probably the President realised that criticism is growing by and by that he is failing to govern and his failures are obvious.  Maybe he thought that in order to stop open criticism he had to have an armed party militia who could instantly deal with open criticism of their leader.  In fear of the cadets some people were silenced.

As it were, and cadets aside, some Malawians, such as members of opposition parties, activists, human rights defenders and others have been making enough criticism for Mutharika to change and measure up his leadership for Malawians to have a better life.

To pressurise him, the country has for the first-time been having demonstrations throughout the country whenever there was an issue of national concern.

To show that all Malawians are feeling the pinch, they could join the demonstrations Human Rights Defenders Coalition (HRDC) who have been the regular organisers of demos.

Believe it or not people in the opposition have been using their voice of reason which has seen Mutharika lose the fresh presidential election. If they had kept silent Mutharika would still be in power.

In fact, one can remember that Mutharika was so comfortable that he even said that it has to be over his dead body for President-elect Lazarus Chakwera of Malawi Congress Party (MCP) to rule this country.  One wonders what Mutharika is doing with such words now that Chakwera has won the election under the Tonse Alliance.

From now onwards Malawians should know that there is no benefit in suffering in silence in a democracy. Elie Wiesel of Israel once said: “Always take a side.  Neutrality helps the oppressor and not the victim. Silence encourages the tormentor and not the tormented.”

In Malawi, some people prefer to remain neutral because they have given up. These are the people who think that there is no use to vote. In the process, they create voter apathy. Such people will learn from Chakwera taking over the leadership that the Mutharika government was giving him no chance to.  Maybe they forgot that no condition is permanent.

The DPP might have thought that the Tonse Alliance had no money to do a productive campaign against them who are in government, where money is not a problem. But what they forget is that people’s will is way above any amount of money.

Even though people believe that money talks, it has failed to talk against Chakwera and his running mate Saulos Chilima, plus the whole Tonse Alliance.

Malawians should pat themselves at the back for making the right noise for Mutharika and his government to fall.  At some point it felt as if it was impossible to replace the government because of the powers that the president has and that all noises that people were making was falling on deaf ears.

People of Malawi must keep on making the right noise for the country to progress. 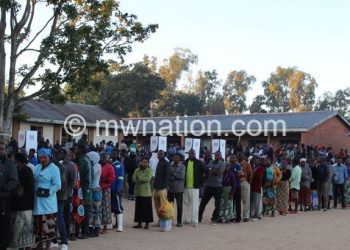