by Lloyd Chitsulo
in Front Page, National News
3 min read
0
Share on FacebookShare on TwitterShare on WhatsAppShare on LinkedinLinkedinShare via Email

Parties in the Vice-President Saulos Chilima’s security detail case yesterday agreed to withdraw the matter, effectively cancelling out the decision by the Office of the President and Cabinet (OPC).

Last month, Chief Secretary Lloyd Muhara issued a directive reducing the number of police officers guarding the Vice-President’s official residences in Lilongwe and Blantyre, transferring police officers working at the residences and withdrawing some of the vehicles assigned to the Veep’s office.

The development came barely days after Chilima announced he would challenge President Peter Mutharika in the 2019 Tripartite Elections under the United Transformation Movement (UTM) ticket. 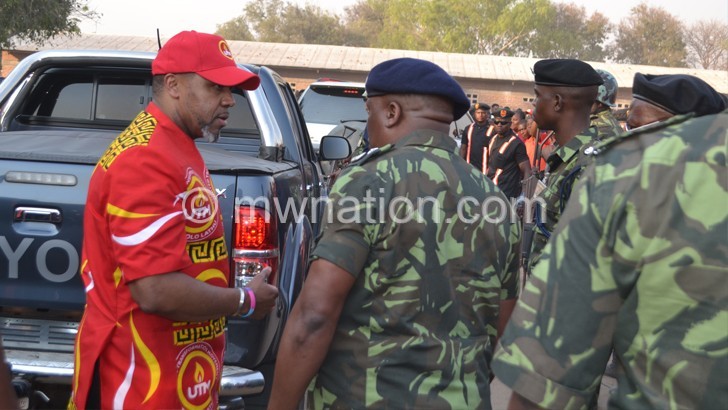 But the Veep, through his lawyers Ritz Attorneys, obtained a stay order and sought a judicial review on the decision.

The case yesterday came before High Court Judge Justice Chirwa for hearing on continuation of the stay order.

But it transpired that both parties had agreed to settle the matter outside court.

The court then instructed that a consent order be made by 12 noon where both parties should agree on and withdraw the case.

“I hereby order that the matter be settled outside court and the consent order be made before 12 noon,” said Chirwa.

In an interview after the brief hearing, one of the lawyers representing Chilima, Mwayi Banda, said they were happy with the outcome.

“The major thing is that the security detail as you may have heard is back and the other one is that the case should be withdrawn. What we will do now is file a consent order by noon and after that, as the court has ordered, the matter will be withdrawn,” he said.

The consent order reads: “The decisions of the respondents reducing the number of police officers guarding the official residences of the applicant in Lilongwe and Blantyre; transferring police officers working at the said residences; and withdrawing some of the motor vehicles assigned to the office of the Vice-President of the Republic of Malawi be and hereby and effectively withdrawn.”

But in an earlier interview, Minister of Information and Communications Technology Nicholas Dausi, who is also official government spokesperson, said government simply complied with the court and that their action was not to be mistaken as an admission that they went overboard.

He said: “Whether we went overboard or not is not the issue, but when one obtains a court order, we are in a democracy and we must respect that.”

Government transferred about 46 police officers, leaving Chilima with seven to man his residences, office at Capital Hill and motorcade.

The Veep, who fell out with Mutharika and the governing Democratic Progressive Party to lead UTM in the run-up to next year’s elections, sought redress from the court and obtained the injunction pending a judicial review.

The order also restrained Chief Secretary in the OPC from withdrawing some of the vehicles assigned to Chilima although government was yet to effect the action.

Following the transfers, some officers were given three to 10 days to wind up at their duty stations while others, such as those at the Veep’s official residence in Blantyre, were given immediate transfers.

Under the Presidents (Salaries and Benefits) Act, the Vice-President, among other benefits, is entitled to one personal bodyguard, one head of security guard, six security guards, two chauffeurs, two cooks and personal assistants.

Since announcing on June 6 this year that he was leaving DPP, Chilima was stripped of his Cabinet portfolio of Minister Responsible for Disaster and Management Affairs and National Public Events.

On July 8, government also ordered that Chilima should no longer co-chair the Malabo Montpeller Forum, an international think-tank to which he was appointed in September 2017. n