Vice-President Saulos Chilima, who is also presidential candidate for UTM party in the May 21 polls on Friday conducted final meetings in the Northern region, outlining a number of promises as his last push in the race to State House.

Chilima had whistle-stop rallies at Chintheche and Tukombo in Nkhata Bay, Ekwendeni in Mzimba before holding a final campaign rally for the region at Mzuzu Upper Stadium where thousands gathered. 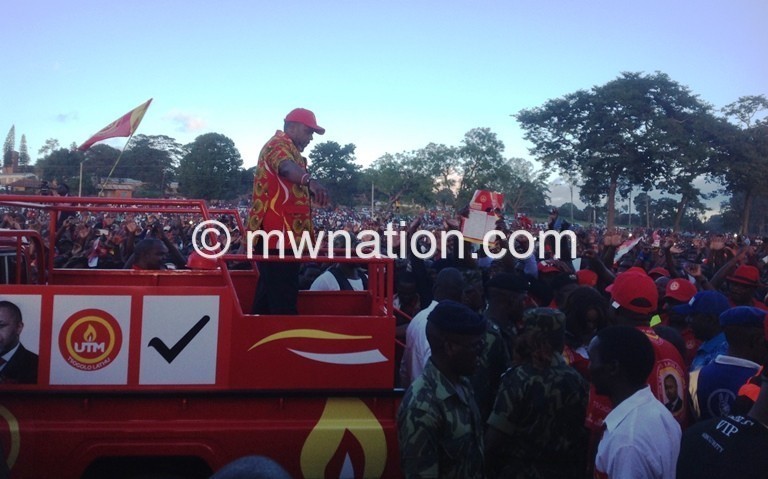 Among others, he promised that the UTM government will provide safe and potable water, improve transport systems but also introduce farming fields and factories as a way of promoting exports, thereby boosting the country’s economy.

Chilima then promised compensations for people who worked in South Africa and martyrs who fought for the country’s freedom.

He attracted huge applause when he promised to construct Mzuzu Airport and Mombera University in Mzimba, two projects that have stalled for years.

Chilima also pocked fun at the Malawi Congress Party and People Party alliance, saying two parties-one which lost in 1994 and the other one which lost in 2014 have joined forces to lose again on May 21.

Said Chilima: “All problems we have will end on 21 May, and that same day, UTM will bring happiness to Malawians. We want to deal with joblessness, lack of better housing, capital for businesses, lack of medical drugs and supplies in hospitals, nepotism, corruption and quota system.

“I have been to many parts of the country, so I know the problems and what we need to do. I will not be cheated by Cabinet Ministers about the situation. I urge you all that after May 21, let’s work harder so that we rebuild the country together.”

He then hit at his critics, saying those that dispute promise of one million jobs, and duty-free week among others have no clue on how to run the country, and must let the UTM implement such after the polls.

As he ended the rally, Chilima did some push-ups, showing the cloud that he likes doing exercises and that such exercises have a positive bearing on his tedious campaign trail.

Before Chilima, Alliance for Democracy President Enock Chihana said the time has come for the country to “deal with thieves”.

Chilima’s last campaign return to the North was never without controversy, especially with ruling DPP.

Ruling DPP youth cadets on Thursday night mounted their party flags and cloth at Shoprite Round-about, in an apparent attempt to stop UTM supporters from mounting their party regalia.

They actually spent a night over there guarding their flags. However, UTM supporters stormed the place Friday morning, forcing the DPP gurus out of the place, and mounted their regalia.