MFR is a project by Nation Publications Limited (NPL) that mobilises for medical supplies and equipment to improve maternal health in
public health facilities.

The project is this year raising funds for Ntchisi District Hospital where 162 babies and 12 mothers die annually due to poor maternal and neonatal health standards.

Four Blantyre-based journalists will run alongside Mphepo through the 64 kilometer stretch -from Gymkhana Club to Hotel Victoria in Blantyre. They include NPL’s Dexter Kaunda, Archibald Kasakula, Jonathan Pasungwi and Josephine Phumisa of Malawi Broadcasting
Corporation (MBC). 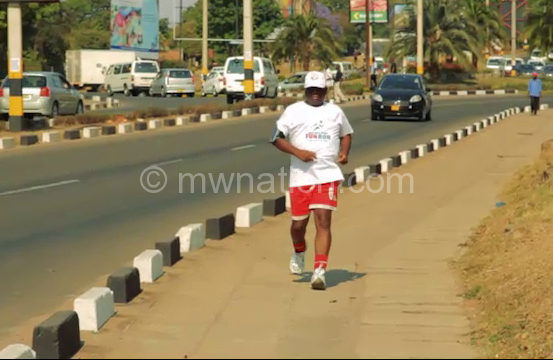 Speaking in an interview ahead of the run, Mphepo said he wanted to emphasise on the importance of having some unity of purpose in a democracy after noting that most citizens care less when it comes to supporting government to providing various public services.

Mphepo said: “For the past 25 years, the population has generally put emphasis on what government should do for them.

In my view, no government in the world will have adequate resources to meet the needs of its citizens. We need to ignore all our differences when it comes to saving life.

The MFR initiative by NPL is one of the best things to have happened in the country. Therefore, everyone should be supporting
it.”

Phumisa, the only lady in the group, said she has experienced enough in life to take part in the Zomba-Blantyre challenge.

“Being a journalist and a mother has taught me so much as regards public health service delivery in the country. I believe media is one
and we each can do something about our country. Besides, I’m studying Public Health with the College of Medicine. I just had to do something not only for Ntchisi, but for my mother Malawi.”

Meanwhile, Zomba City Council mayor Christopher Jana has pledged to see off the runners by running alongside them up to Five Miles.

According to the council’s public relations officer Mercy Chaluma, Zomba will also donate towards the cause in solidarity with Ntchisi
maternal health.

NPL will hand over all the donations to Ntchisi District Health Office on October 13 this year.
The media house has also announced plans to upscale the project, which was incepted in 2005, to three districts per annum starting 2019.