Three days after casting their ballots in the May 21 Tripartite Elections, Malawians are still in the dark about the winner of the presidential election after Malawi Electoral Commission (MEC) last night left the people guessing.

Expectations among anxious Malawians were high after MEC chairperson Jane Ansah earlier indicated that she would hold another press briefing at 9pm.

This was the case after she announced results earlier in the day that showed incumbent President Peter Mutharika, the presidential candidate for Democratic Progressive Party (DPP), had overtaken Malawi Congress Party (MCP) torchbearer Lazarus Chakwera. 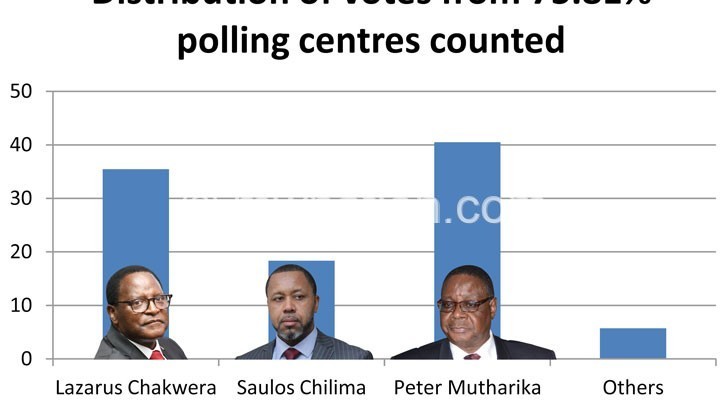 But when she led a team of commissioners to a packed Comesa Hall where the national tally centre is located, Ansah said the commission had suspended the announcement of the presidential election results following allegations of vote rigging in some parts of the country.

She said the commission resolved to suspend the announcement of the results till they have resolved the issues.

Ansah, who is a judge of the Malawi Supreme Court of Appeal, highlighted some anomalies that included an incident at Goliati Primary School in Thyolo District where it was reported that about 6 000 people registered, but 11 000 voted. It was also noted that at Mangunda Court in the same district about 1 800 voted against 1 300 registered.

In response, she said: “I can confirm that the allegations were incorrect because they lack merit.”

Ansah also said MEC investigated allegations of tampering with voters’ sheet at Lauderdale Primary School in Mulanje District where new figures were inserted. She said the commission investigated the results from the constituency and established that it was only the Lauderdale School results that were tampered with.

“We discovered that the rest of the votes were in order and we have quarantined the Lauderdale School results,” she said.

Ansah also reported that the commission is investigating reports about the arrest of a constituency returning officer (CRO) in Nsanje Central for allegedly tampering with the result sheet.

Making an announcement of the presidential results at mid-day yesterday, Ansah said Mutharika was leading with 1 436 877 votes representing 40.49 percent.

United Democratic Front candidate Atupele Muluzi was a distant fourth with 161 499 votes or 4.55 percent of the votes.

Prior to making the announcement, Ansah said all political parties present at the main tally centre in Blantyre had results for the presidential, parliamentary and Local Government elections.

“Our expectation is that they will also crosscheck with their monitors and come back to the commission if there is any disparity,” she said.

Ansah said the commission had also dispatched a team from the head office to investigate allegations bordering on fraud and other malpractices involving tampering with electoral results in Lilongwe, Phalombe, Mulanje, Thyolo, Blantyre, Chikwawa and Nsanje.

With 35.67 percent of the votes counted in the presidential race on Wednesday night, Chakwera had a slight lead over Mutharika.

In the May 21 Tripartite Elections, MEC registered 6 859 570 voters. From the results presented, Ansah said 19 985 votes were declared null and void.

There were no opinion polls during the campaign for this year’s election.

However, a survey by the Institute of Public Opinion and Research (Ipor) released last November showed that DPP, MCP and UTM were the most popular political parties in the country in that order.

The Ipor survey, dated August 2018 and conducted between August and September when UTM was barely two months old, sought to assess the political environment in Malawi 10 months ahead of Tuesday’s elections and give an understanding of the political and economic environment of the country.

While DPP and MCP at the time dismissed UTM’s rating as a third force and popular in the Northern Region and trailing MCP in the Central Region, the pattern of results in the election reflect what the survey established.

Vote of no confidence for former Nkhata Bay MPs