On a windy Friday afternoon, it was clearly no business as usual in Mabuka Village. By 2pm, almost 45 men and adolescents in Traditional Authority Mabuka’s territory had already been tested.  All day, six community health assistants, supervised by a skilled clinician, were going door-to-door, giving the villagers pep talk and HIV testing within the comfort and privacy of their homes.

The strides of the service providers, who test at least 15 clients each, offers hope that the global race to end HIV infections by 2030 is winnable if elusive majorities, especially men and adolescents, get tested and start treatment.

“We all know someone living with HIV. Daily, we bury friends and relatives. We cannot continue doing business as usual. Instead of waiting for us to go for HIV testing services [HTS], the health workers are coming to us. Now, no one has an excuse for not knowing his or her status,” says group village head Mabuka in an interview.

Door-to-door testing is improving the uptake of HIV testing in Mulanje, where up to 17 percent of adults are living with the virus that causes Aids. This is almost double the national average of 10.6 percent.

A study, published by Global Aids Interfaith Alliance (Gaia) in June, underscores the importance of home-based testing in reaching young people and men in remote settings where HIV prevalence is high and fixed health facilities are far apart.

Interestingly, 90 percent of all individuals eligible for the rapid test accepted. Two thirds were the first-timer testers, with men half as likely as men to have been previously tested.

“Putting health services closer to where people live makes more men and young people willing to be tested,” says Gaia country director Joyce Jere. “Interestingly, more men accept to be tested together with their spouses. This means they get uniform information from the counsellors, start treatment together and support each other to ensure no one defaults.”

Besides, the door-to-door approach has the potential to reach young people less reached by facility-based testing and other methods.

The targeted intervention is boosting the country’s push to achieve the 90-90-90 goal by 2020. The global push, backed by the Joint United Nations Programme (UNAids), requires countries to ensure 90 percent of people with the virus know their status, 90 percent of those diagnosed with HIV receive sustained antiretroviral therapy and 90 percent of those on treatment have undetectable viral load.

Men are disproportionately difficult to test. Figures from the National Aids Commission (NAC) show that up to 82 percent of women in the country have been tested compared to only 68 percent of men.

“Most men will only go for checkups and treatment when they are critically sick, frail and dying. We need innovative ways of reaching out to them because not many turn up when we organise moonlight testing sessions or put HTS near places where they hang out. We will not end HIV infections by 2030 unless our health seeking behaviour improves,” he explains.

Misconceptions of masculinity and being the breadwinner—coupled with  mistaken perceptions that hospitals are meant for women—mean that men have fewer opportunities for testing as most programmes target women and children.

“While provider-initiated counselling and testing has increased access to testing for both men and women, men are less likely to seek care when ill. But women, through pregnancy and childcare, interact with the health system more regularly,” explains Jere.

To meet the 90-90-90 target, the country needs to intensify efforts to reach every individual with an opportunity for testing.

The new evidence from Mulanje shows that home-based HTS can overcome many of those barriers and increase access among men and children due to their perceived convenience, confidentiality and credibility.

Only nine percent were unreachable.

Sixty-six percent of those tested were first-timers, accounting for 77 percent of men reached. By contrast, only 59 in 100 women were getting tested for the first time.

The major shock is that 94 percent of children aged 15 – 25 had never tested for HIV previously.

The door-to-door  initiative may have yielded low rates of positive results—four percent—but the high rate of first-timers tested demonstrates that HTS programme offered in the community may be a useful step towards achieving the first 90—testing.

However, men prefer home-based testing over facility-based and voluntary testing.

“Previously, some of us had to walk over 30km to know our status. We were sickly, but still had to endure long walks, queues and prowling eyes,” says Mustafa Layelo, 40 who lives positively.

Home-based testing guarantees them maximum privacy as there are no intruders in sight. The added advantage is that it is accompanied by checkups for general illnesses as well as chronic ones, especially high blood and diabetes.

The high male-to-female ratio among those accepting HTS shows that home-based testing can be an important tool for reaching sexual equity in testing, the findings show.

Gaia currently provides mobile health clinics every Saturday to test school-going adolescents and men who work during the week. n 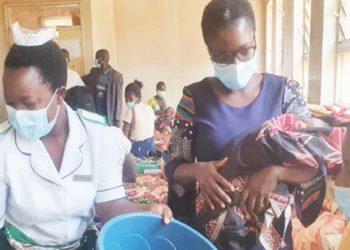