The hypocrisy of Mzimba’s ‘sovereignty’

Debate on the repeated question of Mzimba’s sovereignty refuses to die. Each time it is raised, the subject rarely generates a serious national discussion and it often does not catch government’s attention.

Whilegovernment feels politically safe not to handle the issue openly, such inactionis at times mistaken for consent. And the recent decision by Capital Hill toquit Mzimba for Rumphi to pilot new land laws, the Mzimba Heritage Association(Mziha), a cultural grouping agitating for the independence of the M’mbelwaKingdom, has more reason to believe in its cause.

For Mzimba-based activist Patrick Mwale, who is chairperson of Mzimba civil society organisations (CSOs) on land governance, government is creating a wrong perception—that it has granted Mzimba its wish.

“I suspect the government does not agree with Mziha’s petition but it is playing a political game avoiding to make its position clear. They could be avoiding antagonising one part of the population because it is an election year. This is setting a bad precedent. Government should come out clearly now rather than waiting as if the issue will die on its own” he said.

Mwale, who equally cannot carry out any programme relating to the new laws, said the biggest loser in the whole episode is Mzimba which has lost an opportunity to raise its concerns during the implementation of the pilot phase. The district has seen some development partners leaving to implement land-related activities in neighbouring Rumphi.

By way of background, the discussion to reform land laws in Malawi started in 1996. A remarkable step was made in 2002 when government enacted the land policy which would be more meaningful with the creation of a set of new land laws.

But since then, the nation was engaged in an endless debate on whether to have the new laws or proceed with business as usual. It was only between 2016 and 2017 that Parliament approved a set of new land laws which came into force in March 2018 amid opposition from some quarters of society, including Mziha.

After all these years of national engagement, Mziha stand opposed to the new laws. Among other issues, the cultural grouping is uncomfortable with provisions which allow women own land.

In their petition to government submitted in 2014 and resubmitted last year to the Office of the President and Cabinet (OPC), Mziha wants Capital Hill to recognise Mzimba as a kingdom where laws of Malawi should not apply.

But even before this petition, the Mzimba position has remained unchanged on the issue of the new land laws. In 2013, a member of Parliament (MP) for Mzimba Luwerezi Bofomo Nyirenda attracted controversy when he declared Mzimba as not part of Malawi but just a development partner.

The legislator’s call was madein the context of land laws discussion.

The Bofomo argument may have been forgotten, but the view of Mzimba remains the same that the kingdom must have been treated as an independent one from Malawi.

“That is our decision on land and it is not negotiable. Government came and we informed them the same.

“Ministry of Lands officials came to meet chiefs. They were told the same that our issue is based on a 1904 Treaty. So, anytime we are waiting for appointment from government to discuss our issues relating to the kingdom and kingship,” said Mziha general secretary Ndambazake Thole.

While government is yet to respond to the petition, it has gone ahead to issue instructions to NGOs to stop all activities relating to land much to the frustration of some organisations.

Oxfam and Landnet were both asked to stop their land related activities from Mzimba to Rumphi where government is piloting the new laws among the 10 selected districts. This is a change of plan—according to Ministry of Lands, Housing and Urban Development due to resistance.

Landent executive director Emmanuel Mlaka also blamed Capital Hill for “taming a problem” adding that there is need to engage Mziha and have them understand that the new laws are equally important for them.

“Landnet and other CSOs got a directive from government. It is a directive to stop the activities in Mzimba. The ministry [Lands, Urban and Housing Development] discussed this with CSOs and explained that the directive wants the implementers to concentrate where the law is accepted since the donor for the implementation will not extend the project period if we are embroiled in this lengthy dispute,” Mlaka indicated.

Oxfam Malawi country director John Makina said the change of plan has affected them logistically since they had already done a lot of planning work on Mzimba.

The ministry’s spokesperson Charles Vintulla, in an earlier interview, sounded tough on one part that the laws will equally apply to Mzimba  but was helpless on one end when he said the issue of autonomy for Mzimba is above their ministry.

He said: “These land laws are not by-laws which can be applicable to one local authority and not the other. Therefore it should be clearly understood that national laws are not selective as per the wishes of a particular council.”

This is merely paper work expression, the fact remains that Mzimba is a no-go-zone for land laws going by what has happened recently. For Mwale, a ngoni born himself, the argument advanced by Mziha lacks merit.

“I see no merit in their claim. It’s all about history. They had an agreement with the British government and not the current one. Sometimes we make ourselves a bit more important. But as small as it is, government needs to assert its position clearly all this is an issue which will continue haunting them [government],” he further said.

Mwale’s voice may remain without impact because communications we have seen show on going meetings between OPC and Mziha which has not yielded anything apart from discussing the obvious that “government is working to resolve the issue” a development which gives Mziha a fake sense of hope.

To make matters worse, even after being drafted as part of the national steering committee on the implementation of new land laws—Paramount Chief M’mbelwa V—who alongside Paramount Chief Lundu are the only chiefs in the 10-member committee comprising principal secretaries and other technocrats, stands by Mziha where he is patron.

Without a straight-forward decision, as argued by Mwale, government could be creating Mzimba as one area above reproach thereby setting a bad precedence especially when other corners of the society – equally uncomfortable with some laws decide to put up their own argument against them. 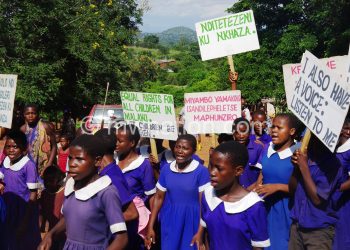