The relief that is cattle farming

Conventional wisdom has it that when the bush is on fire, a chameleon learns how to run fast. The saying puts much emphasis on the necessity of responding and adapting to any changes in an environment for survival.

Threats from climate change are putting millions of people in developing countries under severe pressure of food insecurity and poverty. 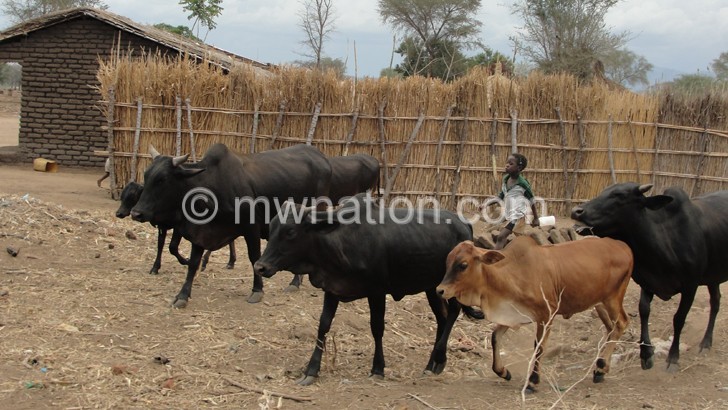 Livestock production is seen as one way of cushioning vulnerable populations from climate change impacts. But for people in Mphaza Village, Traditional Authority (T/A) Njewa in Lilongwe, the threats in an agribusiness environment have forced them to change their livestock production business from poultry to cattle farming.

Through a grouping called Chambwe Cooperative,  they are engaged in individual and group businesses using investments from their savings and loans.

A large-scale monopoly production by a new company (name withheld) that arrived in their area about a year ago has squeezed the cooperative out of poultry farming business.

“Everyone is rushing there to buy chickens because the company sells at lower prices than us,” said Macdonald Khoma, chairperson for Chambwe Cooperative.

While the cooperative offers its chickens at K2 500 each, the company sells the same size of chickens at K1 200 or K1 300 each.

With the company boasting of the capacity for mass production as well as self-production and processing of chicken feed, the cooperative was far much behind in standing toe to toe with the new company.

But now, Chambwe Cooperative has switched its focus to cattle farming by rearing these ruminants for beef production.

Through the Sustainable Agriculture Production Programme (Sapp), the group is now rearing 20 cattle under stall feeding and pass on programme.

“We wrote a proposal to Sapp asking for funds amounting close to K4.5 million for our new venture and it was successful,” Khoma said.

Sapp is a nine-year programme under the Ministry of Agriculture, Irrigation and Water Development. Implemented in six districts, including Lilongwe with financial support from the International Fund for Agriculture Development (Ifad), the programme intends to reduce poverty and improve food security among the rural population.

One of the components in this initiative is the pass-on programme of livestocks such as goats and cattle. Primary beneficiaries receive livestock of their choice, in this case cattle, to take care of. When a cow gives birth, a calf is passed on to a secondary beneficiary and the process continues until everyone owns cattle.

For Chambwe Cooperative, 20 people are rearing the cattle through stall feeding and pass-on programme.

One of the primary beneficiaries is Lauryn Sava from Mphaza Village. She has two cattle, a cow and bull and the latter is the one she bought at K145 000.

“Currently, the cow is in gestation,” she says.

Sava hopes to make money once the animals multiply and mature.

The investment and benefits in cattle farming are long-term for Chambwe Cooperative and that is why it is also doing a similar initiative with 25 goats for short-term and medium-term benefits. Formed more than five years ago as a community savings group, Chambwe Cooperative has 120 members, 75 women and 45 men.

Since its formation, it has practised the concept advanced by the Community Savings and Investment Promotion (Comsip) Union whereby members are encouraged to share only their dividends after a year of savings and borrowings.

Members contribute a minimum of K2 000 per month and their fortunes have grown because of the support they receive from Comsip through various training grants.

With their assets valued at K16.8 million, the group harbours ambitious plans. Some of them include construction of shops for rent, buying of two maize mills and a coaster.

Chambwe Cooperative is one of the few groups that is so resourceful in searching for support from other quarters apart from Comsip, says Mercy Kachere, senior community development assistant who supervises the cooperative and other groups in T/A Njewa.

“They are able to write project proposals to seek funding from various organisations,” she says.

The uniqueness of this cooperative lies in its five-year strategic plan guiding its vision from 2017-2022.

Khoma says they intend to boost their financial base from the current K16.8 million to K25 million.

“With this financial base, we can stand any bullying in business. The poultry farming experience has taught us the hard way,” he says.