by Johnny Kasalika
in Front Page, Weekend Investigate
5 min read
0
Share on FacebookShare on TwitterShare on WhatsAppShare on LinkedinLinkedinShare via Email

Children in poor families work the fields in Malawi, impacting schooling, amid signs of a growing international crisis. The Guardians Sarah Boseley reports in this special report on tobacco: 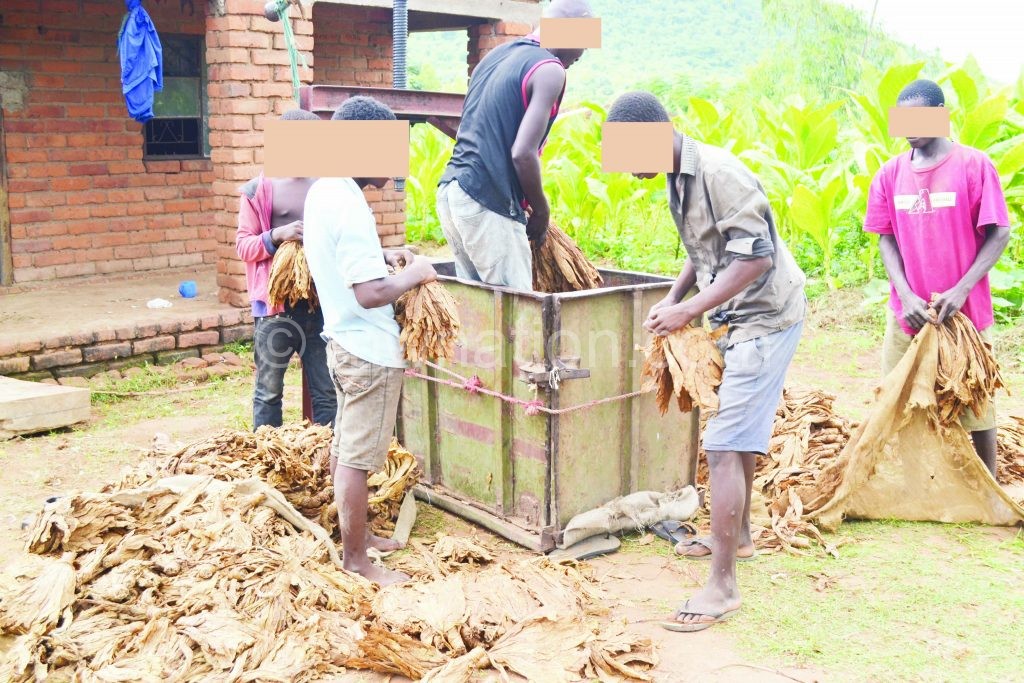 Tiyamike Phiri is 14, with the long skinny legs of a girl entering adolescence. In another world, she would be with friends in the school playground.

Instead, she is bent double at the hips, gouging out weeds from the earth under a savage sun between banked rows of tobacco plants using a heavy hoe, made of a tree branch and a metal plate.

She looks up in some wonderment, unused to questioning such a life for a child. She is not unusual.

There are 18 tenant families on this tobacco farm in the Kasungu district of Malawi, each living in a straw hut. Only two of the other girls go to school, she says.

Two-year-old Jackson Phiri stumbles past. He has a miniature hoe, fashioned by his father, Lazaro, because he cried every time he saw his mother and father set off for the fields carrying tools and wanted one for himself.

There seems an inevitability about the lives of these children.

“I left school last year because I had no school materials,” said Tiyamike, her eyes on the ground and her voice quiet.

“I liked school. I liked Chichewa [her language] best. I got very good grades. But my main problem was I had no exercise books and nothing to write with.”

Without a pen and an exercise book, she could not do schoolwork, her teachers pointed out. But she lives with her older brother and his wife and baby and they have nothing. “I help them in the fields,” she said.

She would go back if she could. “I would like to do nursing,” she said.

Instead, she weeds, builds earth banks for the tobacco plants and sews the harvested leaves together to suspend them from branches so they dry in the air.

Weeding is the worst. “It is a hard job,” she said.

Tiyamike is just one of many children in Malawi who see little future beyond the tobacco fields.

A report in 2011 estimated there were 1.3 million worldwide under the age of 14.

The figures are hard to come by, but the International Labour Organisation (ILO) last year reported that child labour was on the increase, in spite of the tobacco companies’ protestations that they are working to end it.

These children live in the poorest of families.

Tiyamike’s brother Madalitso Phiri, 27, took her in seven years ago after their father died. He doesn’t want her or the rest of his family to work in the tobacco fields.

Like many of the tenant farmers, he sees tobacco as a cash crop that will give him a windfall at harvest time, with which he can change their lives.

“I need to get capital so I can buy land and stand on my own two feet and my children can be brought up well,” he said. “I want my children to own shops and sell things.”

It’s a dream the tenant farmers all nurture.

That when the money comes in, they can go back to their home villages and buy land to farm for themselves or open businesses.

But when the crop is sold, the money is never enough.

They took him to hospital, with a promise from their landlord that he would pay the bill.

Eight days later, Yeriko was still working alone in the fields. He and his neighbours were very worried – without Esther’s help, he would not be able to get all the work done.

In the end, Esther offered to leave her pots and plates, which she had been using to prepare food for herself and her son, with the hospital as surety.

Then she set off on the 9km walk home, with Chifundo on her back.

When she arrived home, the family were together again, but not smiling. “We haven’t had lunch today. We don’t have money to go to the mill to grind maize.”

The families are given a weekly ration of maize, which they grind to a flour, mix with water and eat twice a day as a porridge.

They are given salt and the tools they need, but have no cash unless they do extra piecework in the maize fields.

Because he was alone, Yeriko could not do the piecework after working on the tobacco plot to afford the K300 to mill a pail of maize.

The 17 tenant families—18 including the farm manager—started the season in October and will work on the land for about 10 months until the crop is sold and they get their money.

Chimkukuzi Dickson, a tenant farmer who is also farm manager and earns K200 000 kwacha a year on top of what he gets for his crop, finds it hard to recruit new workers.

Farms poach from each other. “On some estates there may be problems. I tell [the workers] at my farm: you get enough food and you get some cash.”

“Lots of people think that way. Others have nothing to eat [so they will agree to work in the tobacco fields]. They have no alternative,” he says.

How it is exported

Malawian tobacco, mixed with other tobacco, is found in cigarettes all over the world.

A tenant farmer in Kasungu in central Malawi grows tobacco plants with child labour, usually his own children, and the work often impacts schooling.

After a 10 month growing season, involving hard labour sowing, weeding, fertilising and harvesting, the tenant delivers the crop to the contract farmer

The contract farmer has a deal with one of the big leaf-buying companies such, which undertakes to give him tools, seeds, pesticide and fertilisers and buy the crop when it is ready.

It is transported by lorry to the auction halls for sale to the leaf-buying company at a predetermined price; the firm inspects the quality which can modify this.

In Malawi, the main auction rooms are in the capital, Lilongwe, which has the capacity to deal with 12 500 bales of tobacco per day.

A conveyor belt takes the bales of tobacco above the road from the auction halls to leaf processing plants where stalks are stipped out.

The tobacco is packed into crates and sent south by road across the border with Mozambique to the port of Beira.

*Tobacco: a deadly business is a Guardian series focussed on the huge damage of the tobacco epidemic, which continues to cost millions of people’s lives around the world per year, and the industry behind it.

No fans for BB CAF match