Treasury has revised downwards the overall fiscal deficit for the forthcoming financial year to 3.8 percent from 4.5 percent of gross domestic product (GDP), a move analysts argue is insignificant to trigger intended results.

The revision of the fiscal deficit—the difference between total revenue and expenditure—follows a K50 billion cut from K1.5 trillion total expenditure and net lending in the proposed 2018/19 budget to K1. 454 trillion. 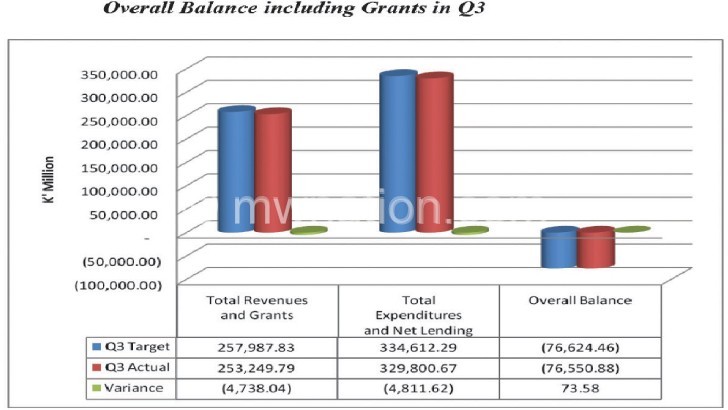 Earlier, government planned to end the 2018/19 financial year with a fiscal deficit of K242.9 billion.

As compared to the current financial year, there was a seven percent increase, with government projecting the 2017/18 financial year to end with an estimated deficit of K224.5 billion against mid-year projection of K183.6 billion.

While a reduced fiscal deficit means a cut in future spending, a potential reduction in public debt  and reduced cost of debt interest payments and less crowding out on private sector, fiscal tightening could cause lower economic growth.

Economics Association of Malawi (Ecama) president Chikumbutso Kalilombe said in an interview yesterday the magnitude of the reduction is insignificant as the budget deficit remains around K192 billion.

He said Treasury’s indication that some maturing promissory notes will convert into interest earning debt means that government will need to borrow to meet its financing gap; hence, potentially heightening the risk of crowding out private sector investment and disturbing macroeconomic balance.

“In this case, low interest rates may not hold out. In addition, such reduction would be more meaningful if it were made on less productive activities such iron sheet subsidy programme and some similar expenditure.

“Without a clear indication as yet on where the cuts will be made, the fear is that government might resort to reducing development expenditure which is already low for a country that needs to move out of current situation,” he said.

In its 2018/19 National Budget analysis, Institute of Chartered Accountants in Malawi (Icam) argued that a planned deficit of 4.5 percent of GDP poses significant risks on desired levels for interest rates and other economic fundamentals.

“As a country, should we not move away from planning a deficit than focusing on what we have or can generate and spend within our means? This projected deficit poses significant risks on desired levels for interest rates and other economic fundamentals,” said Icam president Henry Chowawa.

Finance and corporate governance strategy professor at the University of Malawi’s the Polytechnic James Kamwachale Khomba earlier observed that every government, including those of developed nations, have deficits, but if used correctly, it can be a catalyst for development. n

Who controls our development?