Treasury has released K7.5 billion to the Agricultural Development and Marketing Corporation (Admarc) to enable the State produce trader buy 30 000 tonnes of maize in 337 markets nationwide at K170 per kilogramme beginning this week.

The release of the funds follows the lifting of the export ban by President Peter Mutharika at the end of October.

Mutharika made an undertaking to ensure that Admarc is given money to continue buying the staple grain from farmers to fill up the reserves.

Admarc stopped buying maize after it exhausted the first tranche of funding amounting to K11 billion which it used to buy 39 000 tonnes.

In an interview on Friday, Admarc spokesperson Agnes Ndovie said the main beneficiaries will be smallholder farmers.

She said to ensure smooth transaction and transparency, each market will have a committee that comprises group village head, chairperson, secretary and member of area development committee and an Admarc superviser.

“The role of the committee shall be to monitor and oversee the maize purchases and ensure that all procedures and processes are being adhered to identify smallholder farmers that have brought their maize for sale and to monitor the quality of services being offered to smallholder farmers by Admarc staff,” said Ndovie.

She said Admarc will only buy good quality maize which is free from weevils, any foreign matters and discolour.

Admarc acting director of operations Michael Mnenula advised farmers to ensure that they receive a purchase receipt from Admarc staff, which will show the weight, value of the maize and the day of the purchase.

Admarc has emphasised the need for farmers to bring in good quality maize which can be kept for a longer period and report any malpractices to the nearest district commissioner and police station.

This year, the country produced a 30 percent surplus in maize, which is an important crop, and as part of food, has a bearing on inflation—a sustained increase in the general price level of goods and services over a period.

Role of subsidies in economic development 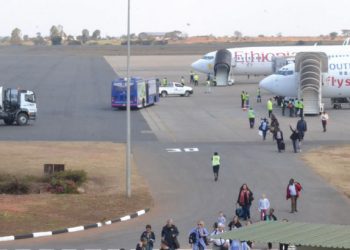