The Malawi University of Science and Technology (MUST) still remains on private land belonging to Malawiâ€™s late president Bingu wa Mutharika because government has not yet finalised the process of changing the title deeds.

The first intake of the university is expected next month, according to Principal Secretary for Universities Development Programme MacPhail Magwira.

Officials at the Ministry of Lands, Housing and Urban Development said this week that documents were sent to State House for Mutharika to sign before he died, but they [documents] have not been returned to the ministry.

Minister of Lands, Housing and Urban Development Henry Phoya confirmed that the process of changing the status of the land for the university is not yet finalised.

He said government was working on the issue with speed as the matter is of national interest. But he did not commit himself as to when that process would end. He said there was no impediment to the process.

Asked whether the university could not open because of the unfinished process, Phoya said: â€œNot necessarily. The legal procedure is just rectifying the title issues.â€

Construction of the MUST started in April last year before any documentation to make the land public.

During the groundbreaking ceremony for the university in April, Mutharika said: â€œMUST is located in Ndata Estate that belongs to me. I have donated to the Malawi nation over 650 acres of land to be the campus for this university. We shall all benefit from this. It does not belong to me.â€

Blantyre-based lawyer Justin Dzonzi faulted Mutharika on the manner in which he handled the donation of the land without following procedures. Dzonzi described the process as â€œnot looking goodâ€ because government has a lot of land which could have been used for the public project.

The university will provide degrees for the undergraduate, postgraduate and post doctoral studies.

The Chinese Government is constructing the university while Malawi will just meet other costs such as connecting water and roads to the university, according to former Education minister George Chaponda. 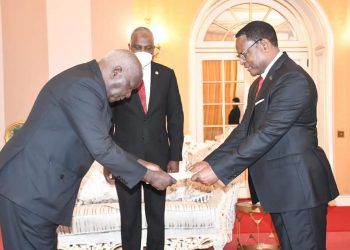