by Suzgo Chitete
in Front Page, National News
6 min read
0
Share on FacebookShare on TwitterShare on WhatsAppShare on LinkedinLinkedinShare via Email

Vice-President Saulosi Chilima launched his United Transformation Movement at Masintha ground in Lilongwe yesterday with all guns blazing, accusing the DPP–led government of perpetuating corruption and nepotism, and saying his movement is ready to usher in the change Malawi needs. 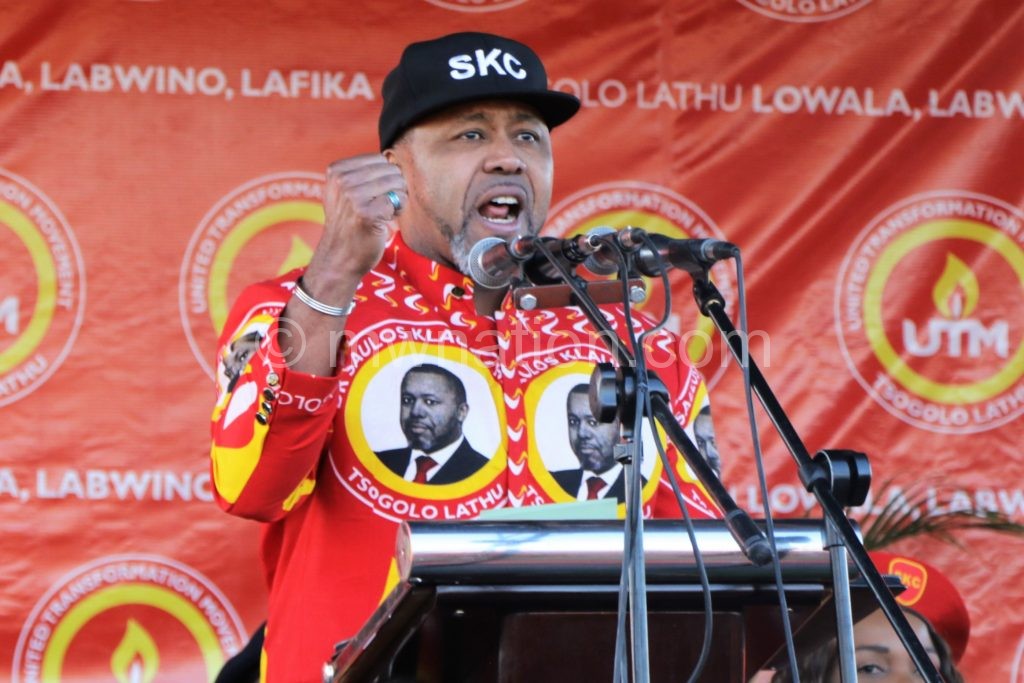 But the Democratic Progressive Party (DPP) has dismissed Chilima’s claims, saying if there was corruption in government, Chilima would have resigned yet he has stayed on as Vice-President.

Speaking at the launch patronised by thousands of people on a rather busy Saturday afternoon in the Capital City, which also hosted two important football matches, Chilima warned that he will soon spill the beans about shady deals the current administration is allegedly involved in, including in the procurement of Escom generators.

He said UTM was formed to clear the mess created by the current administration which continues to plunder public resources when the majority of the citizenry were living in abject poverty.

“The K145 million payout [to the DPP and the President] is just a tip of the iceberg. There is more rot in government. I will tell you how someone decided to procure Escom generators so that someone benefits from the deal…This country is on fire; people are stealing every day and if we do not do anything now, we will have nothing in our coffers by next year,” said Chilima in a Chichewa speech .

The UTM leader alleged that he is also aware that government has procured a spying machine meant to record phone-call conversations through the Malawi Communications Regulatory Authority (Macra), saying all this was out of desperation to rig elections. He said recording people’s phone conversations was illegal and criminal.

He said: “Machine anuwo ngati mukuti mubera mavoti mwauponda [If you think you will rig elections using the spy machine you are wasting your time]”.

Laying down a 12-point plan for UTM, Chilima said he will rein in on corruption. He said after assuming power, he will grant a 30-day amnesty to those who have stolen from the public purse to refund the money. He also hinted at having presidential immunity removed.

On Anti-Corruption Bureau (ACB), Chilima said UTM will ensure that the law is reformed to have the Director General of the institution appointed by Parliament, in a transparent and competitive manner.

Though taming corruption seemed to have been the underlying theme of his speech, Chilima also admonished nepotism, which he said was rampant under the DPP administration. He said it is the intention of UTM to have a merit-based civil service.

The Vice-President also attracted a round of applause when he pledged to abolish the quota system of selecting students to public universities—a subject which remains emotive—with a number of leaders promising to do the same before, but not living to their word.

He said: “Quota system is satanic and evil”, emphasising that UTM has a clear plan on improving university education, apart from creating one million jobs within the first year in office.

But DPP spokesperson Nicholas Dausi said it was ironical that people in the movement are talking about corruption now yet they remained quiet for the past four years.

“There is nothing like corruption in DPP. Why should they see corruption now simply because they have formed a new party? For four years they have been watching corruption and did nothing about it? If there is corruption, let the Vice-President resign from government so that he remains holy as he claims. In civilised democracies, if a minister is against the policies of government, they resign, why is Chilima not resigning?

“All what he has laid down as plans are exactly what we discussed at Cabinet and sharing what is discussed at Cabinet is breach of oath. We have all those plans as DPP. That’s the DPP plan. Talk about quota system, APM [Arthur Peter Mutharika] has always talked about expanding universities. What he [Chilima] has done amounts to theft of intellectual property,” he said.

A political scientist, Nandin Patel, said Chilima should have resigned first before he went on to attack the Mutharika government.

“I have a problem with the Vice-President clinging on to his position. The best for me is for him to resign so that he stands on his new party than to accuse a government he belongs to. I was the first one to comment when Bingu formed his DPP out of UDF [United Democratic Front]. I said it was wrong and immoral. The same thing with JB [Joyce Banda], who formed PP [People’s Party] when she was still vice-president under the DPP administration. This should not be encouraged because we elect the Vice-President alongside the President on the same ticket. They are one and the same; hence if the Veep disagrees with his own government, he must step aside. We must not make it right simply because Bingu and Joyce Banda did the same. Two wrongs do not make a right. I know this is quiet unpopular opinion going by the moments, but I maintain it.

“I have not followed the launch, but I think the movement is about opportunism—people disappointed elsewhere coming together to form a party, but let’s wait and see,” she said.

Chilima’s speech at Masintha is a clear indication of how he has become an enemy of a system he has been part of for the past four years. He has openly declared war against the DPP and his boss [Mutharika] who he is accusing of maladministration.

Setting the tone of speeches at the launch was former first lady and  presidential adviser on Safe Motherhood and HIV and Aids  Callista Mutharika, whose leaked WatsApp message, which  favoured Saulosi Chilima over her in-law, hinted at the formation of the movement.

UTM national chairperson Noel Masangwi alleged that they were warned by the late president Bingu wa Mutharika in 2011 that his brother [Peter Mutharika] was not presidential material. Masangwi also took time to hit at MCP, accusing leader of opposition Lazarus Chakwera of hypocrisy in the manner he handed the controversial K4 billion allocation for members of Parliament meant to facilitate development.

The movement’s secretary general Patricia Kaliati said, like the rest of Malawians, UTM members are disgruntled because of the poor leadership.

The maiden Masintha rally witnessed a large number of young people gracing the launch, with a mixture of political colours, including Newton Kambala’s United Transformation Party which has joined the movement and Manganya’s [Michael Usi] Wodya Zake Alibe Mlandu. There was also a live band performed by Soul Chembezi.

Some notable faces present were given an opportunity to endorse Chilima as UTM torchbearer in 2019. They Lucius Banda, Speaker Richard Msowoya, Loveness Gondwe, who once led the New Rainbow Coalition and former first lady and legislator for Balaka West Patricia Shanil-Dzimbiri. Members of Parliament who have joined the movement include Olipa Muyaba and Chihaula Shaba from Mzimba, Malisoni Ndau from Ntcheu, Mwanza Central MP Paul Chibingu and Boni Kalindo from Mulanje.