In Malawi, worn-out tyres are a common sight. As vehicles on the roads increase, tyres pile. According to the Directorate of Road Traffic and Safety Services (DRTSS), 48 vehicles enter the country every day. As the wear and tear continues, the wheels go up in smoke as motorists struggle to discard responsibly.

Why do national IDs expire?

“People either burn tyres to warm themselves or use for cooking. Some just dump them in drains and open spaces. But all these methods are not acceptable ways of disposal,” says Environmental Affairs Department director Tawonga Mbale. 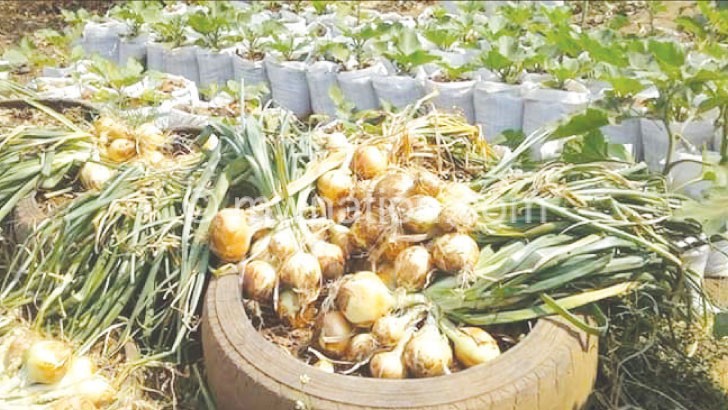 To her, the burning issue about setting tyres on fire is that the thick, blackish smoke contains gases that pollute the environment and contribute to climate change and respiratory problems.

World Health Organisation (WHO) says the spiralling emits dioxins—toxic gases that do not only cause cancer ,but also harms the ozone layer.

This is the sticky point about the influx of vehicles, which has created a lucrative market for truckloads of both new and secondhand tyres arriving from North America, Europe and Asia.

Everyday, some artisans at Ekwendeni in Mzimba, Tsabango and Ngwenya in Lilongwe, Soche Hill in Blantyre and rock outcrops of Zomba torch worn-out tyres to break rocks for sale.

“This cannot continue,” says Richard Mdyetseni, 42, who grows onions and tomatoes in tyres dumped by motorists.

The “green tyres” are a common sight in the backyard of his home in Area 38 near Bunda Turn-off in Lilongwe, where he also grows green pepper in sacks. The accountant, who obtained a master’s of agribusiness from Bunda College of Agriculture, slices the so-called ‘useless’ tyres in half and fills them with soils enriched with manure to make fertile troughs for these high-value crops.

In this way, the executive director of Chisomo Children has created a second source of income for his family while slowing the build-up of a neglected polluter of land, water and air.

The father of four grew up in rural parts of the sprawling Lilongwe. He is worried that  crop yields in the sprawling plain, a bread basket for Lilongwe City, are falling due to overused soils, waning land holding size and climate change.

“If I compare the crop yields of 20 years ago and now, there is a stark difference. Although there is increased use of chemical fertilisers and hybrid seed, the crop yields continue to dwindle drastically,” he states.

Through his farm on the wheels, he is cashing in on the growing demand created by rapid population growth. The capital city’s rising population, estimated at 1.27 million, represents an ever-growing market for food crops.

Interestingly, the home-based farmer markets his green business on the social media.

“I’m waiting to hear from you. I can set up and hand over a complete veggie farm for you using basic, but highly productive approaches.

“Who said you cannot have it? Just one acre can turn fortunes right in front of you,” he writes on Facebook.

He reckons threadbare tyres can produce enough onions for supermarket shelves sagging under the weight of farm produce imported from Tanzania, Zimbabwe and South Africa.

Away from farming and uplifting children, what makes him grin with joy?

“What makes me happy,” he opens up. “Seeing trees grow: planting, taking care [of them] and being proud of them. This is what I have been doing for the past 17 years.”

Mdyetseni may not have tapped the financial benefits of his woodlot, but treasures the fresh air, the beauty and “the harmony of nature it brings”.

“I have seen long forgotten bird species come back, picked mushrooms in the dry season, snakes in the undergrowth and butterflies of old seeking sanctuary in the trees, ” he says.

The planter’s passion for green spaces is so pronounced that the healthy crops sprouting in tyres and sacks is a serious business, which benefits poor women on the streets of Lilongwe.

Counting the gains, he unravelled the social enterprise from the sacks and tyres in the shadow of his fenced home to win-win deals in a busy business spot in the capital.

He narrates: “Each cooler box contains 30 packs worth K15 000 each. I will deliver to a lady in town who has an Airtel Money booth at a busy street corner. She will get a K100 for selling each pack, totalling K3 000 for her marketing service.

“If you distributed 20 cooler boxes to 20 agents a day, you would empower 20 ladies downstream. From the one acre garden, each would earn an additional k3000 a day!”

Most importantly, reuse is one way of reducing waste polluting the environment, especially for rubber which takes centuries to decompose.

“Using tyres to grow vegetables is one way that people are using in backyard farming. Environmentally, this is a reuse strategy to minimise the amount of waste from used tyres. However, research has not been done on whether the tyres dissolve with time,” says Mbale.

And Mdyetseni says this is the major gain.

“I think the environment is the best winner of them all. If farmers can be persuaded to adopt it, the approach would drastically reduce the tyre burning culture that spews and emits harmful gases into the atmosphere.”

Road safety for all

Why do national IDs expire?

Road safety for all