Voices from the slum

When slum dwellers converged on Lilongwe, in Malawiâ€™s capital, their mission was simple: to get themselves out of the suffocating conditions that have gripped them like a vice. BRIGHT MHANGO was at the meeting which took him to Mtandireâ€”one of Lilongweâ€™s backwaters struggling to shake off the tag as a haven for criminals.

Rose Robert is only 20, but she already has three children. Uneducated and without any skills, she depends on her husband, who sells chicken parts, for a living.

She sits home all day waiting for her husbandâ€™s return.

Rose sits in a mass of flies and right next to her toilet and dump site. Her bathroom is a shack of strewn paper only just cordoning off would-be onlookers. The water that flows from the bath-shack is channelled into a pit that doubles as a refuse pit.

The water plus the refuse join forces to produce a sewage-like stench. This, however, does not bother her; she sits comfortably with her friend eating away from plastic plates placed on the dusty ground.

The ground in covered in feathers; feathers from the chicken her husband slays.

Robertâ€™s house is about seven by five metres. It only has one bedroom. Electricity is out of the question; after all, it is in Mtandire, one of the biggest slum areas in Lilongwe falling along the ranks of some townships of Kachere, Ndirande and Mbayani in Blantyre and Salisbury in Mzuzu.

To get to Robertâ€™s house, one has to negotiate tricky mazes, passages sandwiched by concrete and straw walls. Passages pass between drinking dens and toilets. In some cases, one has to sift through clothes on drying lines and jump over water flowing from bathrooms.

It is like the Brazilian favelas, Mexican barrios and the Zinc-ridden ghettos of Kingston, Jamaica. Many newcomers to Lilongwe are told that areas such as Mtandire house the cityâ€™s hardcore criminals and that the residents are violent by nature.

â€œItâ€™s hard living here. Children sleep in the living room and we cannot afford visitors because we have no room. Water is hard to come by here. For example, in the last four days it hasnâ€™t been flowing, so we have been going to Area 47 to look for it,â€ said Robert.

Robert said the water problem sometimes forces them to get up at 3am, just to fetch the precious liquid.

Her rubbish pit only has the fair garbage: feathers, paper bags and some vegetable stems. The rest of the refuse is stacked in a sack and later thrown into Lingadzi River since no refuse collection services exist in Mtandire.

The children of Mtandire happily play in the dust; innocently mingle with the red-eyed elders who have a thing for every drink achoholic. Many pubs in Mtandire are extensions of houses and thus a sizeable amount of children are growing up with beer.

Their pals just a 20-minute walk away in Area 47 cannot find dust to play with even if they looked for it. All they have is tarred roads, sofas and play stations to play with. Their water system rarely dries up and garbage collectors from the city council know the neighbourhood like their wives.

The houses are bigger in Area 47 and the people in the suburb richer. At the far end of Area 47, there are high walls, obviously to keep out Mtandire residents. There are no through roads and the walls are almost standard as if they agreed to make them uniform.

It is like residents of the area read about the Israeli wall that keeps out Palestinians.

Secretary of the Informal Settlement Network, Tony Golliati, said living in the slums in this age is like living in Nyasaland, the pre-independence Malawi.

â€œWe have no water, no proper housing. When the rains fall, itâ€™s a mud puddle here and you can see how thin the byways are. When there is a funeral, itâ€™s hell to move a coffin out of this place. We wish we lived better lives. We hear government allocates money to people like us but we never see such money,â€ said Golliati.

He said there are about 18 000 people in Mtandire, but with only one primary school and no secondary school, a situation he feared is designed to keep the poor forever poor.

Nation Publications Limited Chief Executive Officer, Mbumba Achuthan, who also attended the meeting and toured the slums, could not hide her shock at the conditions in the area.

â€œItâ€™s amazing how just a road can divide people. The conditions here are appalling; no sewer system and I understand just across the river there is a bush but because rich people are building houses there, there will soon be electricity, water and good road networks,â€ she said.

As a media person, Achuthan said media should play an affective interactive role in the fight for slum dwellers.

Executive director for Centre for Community Organisation and Development (CCODE) Siku Nkhoma said unless Malawi starts addressing the issue now the future looks scary. She bemoaned the lack of funding and planning to check slums from spiralling out of control.

â€œLook at a town like Kasungu; it gets K2 million kwacha [about $12 000] from government. What can a town with 50 000 people do with two million?…but there is hope, we are not yet at the level of other countries like Kenyaâ€™s Kibera slums or South Africa.

â€œWe still have space to plan and we do not need big funding to do it, but there is no urgency to solve the problem,â€ said Nkhoma.

She said CCODE will continue negotiating with government and helping people in their quest to upgrade their slums.

Bizwick Gomba, 35, left Mazinga Village in Madisi, Dowa, this year. He told Nation on Sunday that his pork business was sketchy in Dowa where unless tobacco sold well, people did not buy enough to sustain him.

Gomba said in Mtandire life is better: he rakes in a lot of money daily from the pork; he lives in an iron-sheet house and says his children will grow up in town and know more things than in the village.

Until he arrived in town, Gomba was part of the 80 percent of Malawians who live in rural areas. Figures indicate that by 2030, the trend will reverse as only 20 percent will be in the villages.

The rest will live in urban areas which are attractive in the way Lilongwe attracted Gomba.

The problem is, with no skills and no starting capital, will everyone sell pork? The answer is, of course, the makeshift homes like Mtandire, which, despite standing for 50 years, has nothing standing that was built that long ago.

Seven out of every 10 people one meets in Malawiâ€™s urban areas reside in informal settlements; that is about 1.7 million Malawians living in Mtandire-type settlements, according to the Ministry of Lands and Housing.

Well, it seems there is a wind whispering conscious voices in the favelas and shanty ghettos.

On Wednesday last week, slum dwellers from almost all districts in the country met at Mtandire and agreed that they are tired, not only of living in the concrete jungles, but also of waiting on politicians to solve their problems.

â€œThis fund will be capitalised through community contributions, funding partners, Malawians of goodwill and government contributions,â€ reads a communique that the slum dwellers released at the end of their meeting.

The slum dwellers will have to contribute 10 percent of the funding for the development projects they want.

Nkhoma warned that the effects of ignoring the slums will later catch up with the rest of the city who only think that slums are full of vice and to be ignored.

Already, there was no government representative at the meeting despite being invited. Right now, another Bizwick Gomba might be preparing to come to town and if the country continues ignoring them, we might as well buy that newcomer a gun because crime and vice may be his only way out.

Malawi out of afcon 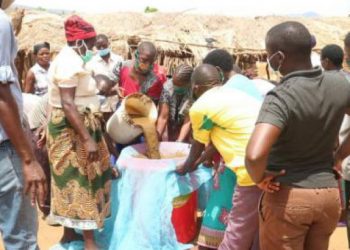 Malawi out of afcon