Voter registration yesterday started on a low note in Dowa, Ntchisi, Nkhotakota and Mchinji with  some centres sending away people who, although will have turned 18 by May next year—but will not be 18 on November 9 this year—when registration ends.

Supervisor for Chimpeni Registration Centre in Dowa Central Constituency, Patrick Kadziotche, told Weekend Nation that his centre was sending back registrants because the Biometrics Voter Registration Kit (BVRK) rejected their national identity card on the basis of being under age. 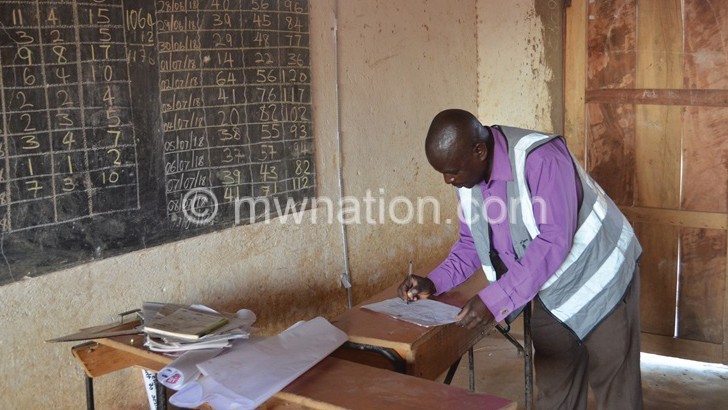 He said he was not surprised because even during his orientation, as a presiding officer, he was told that the registrants have to be 18 by the end of voter registration process, which is November 9 this year, and not necessarily by the voting day.

Robert Nyongani, a Malawi Congress Party (MCP) monitor at Aimalandiwo Registration Centre in the district, expressed concern over the development, saying this would prevent eligible voters from voting in the May, 2019 elections.

“There is no way a person should be denied of an opportunity to vote when by 21 May next year he/she will have attained 18,” he said.

Said Chinkhuntha: “Actually, the Act is in conflict with the Constitution on this matter. Therefore, the MEC commissioners opted to settle for the Constitution, which is the Supreme law of the country. And unfortunately, this is not in line with what people were used to in the past elections.”

According to Chinkhuntha, the Act was effected without amending the Constitution, which means the previous elections were based on the contents of the Act and ignored what the Constitution says on age.

When a registrant comes at the centre he or she is expected to present his/her national identification card for scanning with the Biometric Voter Registration Kit be (BVRK) which, if the person is under age, the kit rejects his registration. The machine was configured only to accept those who will be 18 and above by November 9 this year, according to the Constitution.

Several polling centres were opened in good time, according to several polling staff we spoke to, but the numbers we witnessed were not as impressive.

In Mchinji, Weekend Nation journalists witnessed no long queues, with the most glaring turn out disappointment at Kamwendo Trading Centre’s  Kamwendo Model School, where at around 2pm there was no person to register.

The centre had registered 220 people in the morning, while a polling centre at nearby Guilleme, about 68 registered by noon, while at Zulu Primary School only 179 had registered.

But MEC officials at the centres expressed optimism that the figures will soon catch up. All centres, too, did not register any complaints about equipment or logistics.

Mchinji is predominantly opposition Malawi Congress Party (MCP). Some residents cited frustration by the party’s past election defeats as one of the reasons people are less willing to participate in the elections.

In Nkhotakota, the exercise was characterised by glitches—ranging from faulty equipment to late arrival of MEC staff to the centres.

According to MEC electoral services officer, Fyson Magalasi, a team of technicians was already on the ground to fix the faulty BVRK kits.

Said Magalasi: “We are hoping that things will return to normal in the next days.”

In other centres such as Kasangadzi, Chamalire, and Liudzi they faced power failure as solar panels meant for the exercise malfunctioned due to bad weather. —Reporting by Golden Matonga, Jacob Nankhonya, Staff Writers and Davie Mchinga, Correspondent.