The first phase of voter registration exercise for the 2019 Tripartite Elections starts today in Kasungu, Dedza and Salima districts.

The Malawi Electoral Commission (MEC) has since urged all eligible voters, including those who will turn 18 on the last date of registration in November, to register to vote next year. 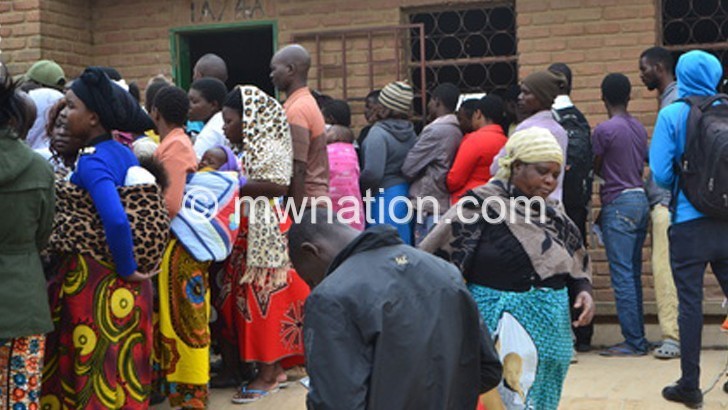 MEC director of media and public relations Sangwani Mwafulirwa said in an interview yesterday everything is set for the exercise with all staff deployed and all equipment dispatched to centres.

He said there will be no extension to the registration period.

Said Mwafulirwa: “All staff, that is, biometric voter registration [BVR] kit operators, registration supervisors and security personnel have been deployed and we have dispatched all equipment to all centres. And considering the current electricity challenges, we have also included generators to ensure that registration runs smoothly.”

The MEC spokesperson also responded to reports that some police officers had threatened to boycott the exercise due to low allowance.

“It is only in Kasungu where officers were protesting the allowances. We have discussed with them and they have understood. We have deployed 589 police officers in all 289 centres in the district and as I am talking now, they are all in their designated centres,” he said.

Among others, the officers were protesting a K65 000 allowance for two weeks, saying they had expected to get at least K10 000 per day (K140 000 for 14 days) for those in the lowest grade, according to their office arrangement.

One officer in Dedza, who opted for anonymity, confirmed to The Nation that they have been given K32 500 as the exercise begins and the remainder will be paid at the end of the exercise.

The exercise, which targets nine million people, is expected to be carried out in eight phases and the second phase is scheduled to run from July 13 to 26.

Speaking on Sunday at Kagwa Woyera Parish in Lilongwe, Vice-President Saulos Chilima asked Malawians to turn out in large numbers to register to vote in the May 2019 Tripartite Elections as the voter registration exercise starts.