In an interview on Monday, Chinsinga described Kachali’s remarks (made at a rally in Lilongwe on Saturday) as unfortunate and a demonstration of a strong penchant for authorities to abuse State machinery to punish those holding dissenting views.

Kapito, who is executive director of the Consumers Association of Malawi (Cama), on Monday said he is not scared. He said VP Khumbo Kachali’s threat will not silence him because his fight is not personal, but for all concerned Malawians.

Without making reference to any particular case, the VP said his statement was “just a reminder” to Kasambara.

But Chinsinga said it is unfortunate that the “whole Vice-President can sink so low as to utter such a statement in this democratic dispensation.”

He said: “When coming into that office, the VP was sworn in to defend and protect the Constitution and the people. [But] this demonstrates his lack of understanding to be a leader and how to behave.”

VP’s personal assistant Kondwani Munthali said the following in an e-mail response when called to clarify what his boss meant by his remarks:

“The Vice-President speech was based on the challenge of foreign exchange and how President Joyce Banda’s bold decision to devalue improved the situation and he used Kapito’s case as a reference that issues of foreign exchange were so sensitive in the past that even Kapito was arrested for being suspected of having acquired the same.

“At no time did he instruct anybody to arrest Kapito nor insinuate the same. Mr. Kapito as an advocate of free speech, a very transparent and accountable gentleman, should first seek to listen to voices of reason and not use the Vice-President’s reference as a scapegoat to achieve fame at the expense of the well-being of Malawians.

President referred to is a fact and he only said since the Justice Minister was around he can inform the nation of what was [the] outcome of the case. It is becoming a habit of certain quarters to deliberately put words into the mouth of the Vice-President or translate them without even hearing his context even when they have not heard such remarks in vertabim.”

Kapito, who was also critical of the late president Bingu wa Mutharika and his DPP administration while serving as chairperson of the State-funded Malawi Human Rights Commission (MHRC), was arrested in March last year on suspicion that he illegally obtained foreign currency and that he was in possession of seditious materials as he was on his way out to Geneva, Switzerland, to present a paper on the human rights situation in the country.

The charges on forex were dropped after police investigations found that he acquired the money using legal and acceptable channels. Since the death of Mutharika last April, nothing has been heard on the sedition matter. 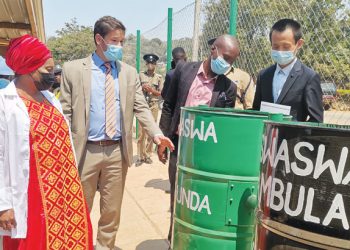