The polls brought to an end an exciting circus which had everything; the thrills, suspense, despair, hope and any other emotion that you can think of. It was the first time for Malawi to have such type of an election so, understandably the hype and interest surrounding the exercise was huge.

In the same vein, those participating engaged every mode of operation to make sure that their campaign was the most lively and effective. Everyone did their best to ensure that their rallies were the most attractive and followed.

You can rarely create a fun mill without music. So, as usual local musicians were called in to be the elementary effects of the campaign trail. Considering the monetary rewards at the end, many artists were always going to be willing participants.

Indeed, they played their part in helping to make the campaign exciting and colourful. For the first time reggae band the Black Missionaries were trapped by the campaign vibe too.

Their appearance at Njamba Freedom Park during Tonse Alliance rally on the last day of the campaign, surprised people in equal measure as it did excite their fans. Having joined forces on stage with Lucius Banda and his Zembani Band, they completely changed the atmpsphere at the venue.

However, the main actors of the campaign seemed to be the pair of Tay Grin and Dan Lu who garnered support for the blue and yellow partnership of Democratic Progressive Party (DPP) and United Democratic Front (UDF).

The association of the two and their pay masters is well documented. It’s a marriage which goes beyond the last two years. To add to that, Tay Grin contested for a parliamentary seat on a DPP ticket in the last elections.

Their ties with the party have made it hard to separate their art from the party establishment. It has become hard to discern clearly whether their association is ending at merely providing a service to sustain themselves as artists.

Just like the two and many others, the truth lies in what they hold in their hearts. Nobody can blame them. It is within their right to associate with whosoever at any level.

The problem only comes when you get on the other end and you are at pains to explain to all who care what exact role you assumed in the whole setup as has been the case with other artists.

During this campaign, at some point artists such as Macelba, Janta, Skeffa Chimoto and a few others joined in and participated in a number of rallies. Today very few people can remember their involvement. Is it that they played it smart or they are not famous enough?

The explaining that some artists are having to do now stems from the realisation that their fans are drawn from a heterogeneous community. In there you have sympathisers of different political parties. As an artist, the least you can do is to misalign yourself with your fans because of a political line.

Politics is a very emotive indulgence. You can never rule out the possibility of people entering into a mode of permanent animosity because of differences in their political preferences. In the same vein an artist can lose followership because of the flag you are raising.

If you should stick your foot in the political pot, make sure you know exactly what you are doing. if you are careless know that you will pay for your miscalculation sooner or later. It is always important to watch how far we go! 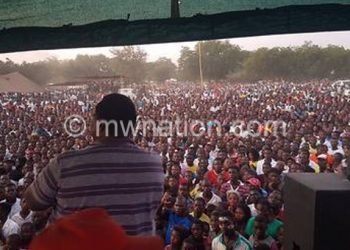