How can farmers and fishers co-exist as lakes dry? JAMES CHAVULA unravels a simmering in a wetland slowly drying up.

For traditional leaders around Lake Chiuta in Machinga District, the challenge to balance the interests of fishers downstream and farmers upstream remains immense.

The falling water levels of the lake on the borders between Malawi and Mozambique have heightened conflicts between the fisher folk and rice growers in Kamwaza Rice Scheme along Lifunu River.

Rice remains the widely grown in the wetland, occupying about 541 500 acres. However, it has come under fire following the construction of the scheme.

According to Resolute Development Solutions water expert Fred Boltz, the main challenge about such competition over water use is the focus on individual interests, not mutual benefit.

“This is not a helpful approach. For inland fishing, the key is to demonstrate the interests are compatible,” he said in a panel on sustainable fishing at World Water Week, organised by the Stockholm International Water Institute Sweden.

Concurring, Simon Funge-Smith, from the United Nations’ Food and Agriculture Organisation (FAO), says there is

there is no “win-win solution” when individual interests dictate such races for shared water.

“However, I do believe there is a possibility for a reasonably cost-effective collaborations and agreements,” he said at the global conference on water issue.

Still, discontent is growing and affecting the sustainability of efforts to conserve water, fish and the ecosystem in villages surrounding Lake Chiuta.

The fishers accuse the architects of the scheme upstream of blocking the lake’s main inlet. But the rice farmers say they only abstract a little water, leaving the rest flowing to the transboundary lake.

“The scheme may be to blame for the drying lake, but insufficient rains in recent times are also to blame,” says Fisheries Integration of Society and Habitats (Fish) Project official Elube Kachilola.

Statistics from the USAID-funded Fish Project show Lake Chiuta waterline is just about half its desired levels of 580 – 650mm.

But the fishers in 16 villages, who fled to Njerwa when the lake run dry two years ago, are having none of this arithmetic.

“Our area receives insufficient rains, but the lake would not have dried up fast if the river had been left to flow freely,” says Cecilia Jackson.

To Lake Chirwa Fisheries chairperson Mathias Mainala, the making of Kamwaza Rice Scheme was fraught with broken promises from the start.

“We saw this coming,” he says. “We expressed our worries at the onset, but the brains behind the scheme assured us that they would not disrupt the river. When we visited the intake recently, we were surprised to discover that their dam was full while the lake is drying.”

“When the lake dries, we will be in trouble,” says Mainala.

Lifuni is equally stressed by drought and siltation. From a single-lane bridge where rice growers control water, we saw a frail rivulet trickling into a quarter-full dam—signaling a no less crisis upstream. From the gaping reservoir, weaker rivulets flow past a concrete slab to the rice scheme.

The fishing community blame this for the water stress in the lake.

Who loves to starve?

He argues: “The scheme is important for the food security in farming families, but there was need to eject the water back into the river for the benefit of villages on its banks and near the lake.

“Therefore, the fisheries and agriculture officials need to explore ways of ensuring both sides benefit,” he says.

The misunderstanding rages as both crop yields and fish catches are declining due to climate change and breakdowns in the ecosystem.

According to Chief Ngokwe, the main problem is that the voices of the fishing communities “did not count” in the designing and running of the rice scheme. “Nobody likes to starve,” he says. “Government and its partners had good intentions when they constructed the scheme, but the way they diverted the water has brought more problems. Authorities must do something about it before the fishers and farmers start fighting for water.”

At stake is the right to water and global goals to end poverty by 2030. Sustainable Development Goals (SDGs) oblige governments and development partners to ensure everyone has enough water and food. As rice takes root in the sprawling scheme, the fishers feel they are being left behind and their livelihoods are being chocked.

The future of both fishing and farming in the wetland looks bleak if the situation is not kept in check.

Stagnant pools, not a full-scale lake. Just dams in drying mud, not an expansive fishing ground with boats gliding where fishers feared to cast their nets in futile. An endangered wetland under a scorching sun.

This was the depressing picture early this year when we visited Lake Chiuta, which sustains 16 villages along its shoreline.

The locals surrounding the lake on the shared lake say its levels keep dwindling. They fear a worsening water crisis in the south-eastern border region.

Chief Ngokwe, who is spearheading negotiations between growers and fishers, offered unsettling flashbacks: “Life was tough around this time in 2016. We used to walk on dry patches when crossing over to the neighbouring Mozambique.”

Some liken the walks on a dry stretch to a famous biblical tale in which Israelites miraculously crossed the Red Sea in escape from their bondage in Egypt.

But to the fishing community, it was neither a triumphant march of a chosen few—but a cause for worry for thousands throughout the villages along Lake Chiuta, north of Lake Chilwa.

The two lakes, only separated by a sprawling sandy ridge, are hit hard by chronic drought which worsen hunger and poverty for millions of Malawians.

Their recollections put into context a story of water scarcity in southern Africa, where the drying of dams that supplies water to Cape Town City in South Africa confirms the chilling effects of climate change.

Good rains in the 2016/2017 growing season somewhat restored optimism in Lake Chiuta wetland, which is hugely prone to climate shocks.

“The lake is rising, but not adequately. We need some more,” says Linosi Chikwanje, from the maize-growing Nafisi Village.

But 2018 was no end to their misery as hopes for an exodus from hunger to surplus was dashed by another spate of drought.

At Big Chiuta, the deepest point, Njewa villagers point to a line of eucalyptus, located almost 120 metres from the shoreline.

The rains started late and vanished too fast to fill the lake, they say.

“The lake used to fill all that stretch to the trees, but it has been receding for years. Five months of good rains were not going to be enough,” explains Ngokwe.

Most parts of the lake are just a knee-deep, even at Big Chiuta.

The levels of the lake less visited cause anxiety in the families on its beach. Their fingers point one way—either upstream or towards the blue skies that have not brought enough rain for four years. 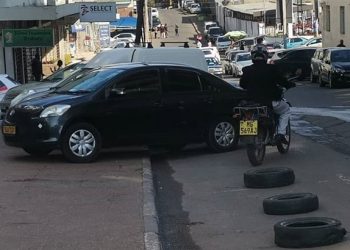 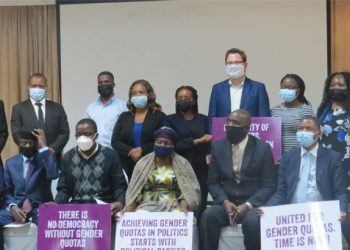