Relief, ecstasy and triumph were the overriding feelings in all that were associated with the 68-kilometre -run from Zomba as the runners finally made it to the finish line on Friday in Blantyre.

This was determination at its best, by citizens at their patriotic best. 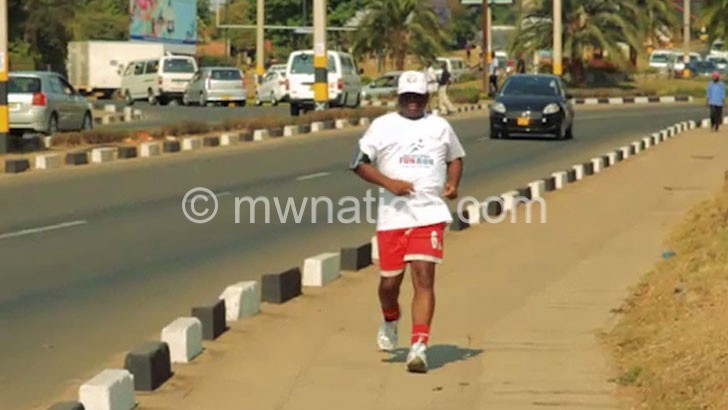 This was endurance at its best, by men at their patriotic best.

The gesture was in support of the Mother’s Fun Run, a project by NPL that mobilises for medical supplies and equipment to improve maternal health in public health facilities.

But the run, aimed at raising funds to help curb maternal and neonatal deaths in Ntchisi that stand at 12 and 162 every year, was not without surprises.

As the runners readied in the early hours of Friday, Chikondi Phikiso – a work colleague of Semu-Phumisa, announced she would be joining the runners. She had caught a minibus and spent a night in Zomba on her expenses, just not to miss the event.

The team was still reeling from fresh news that Mphepo’s wife, Chimwemwe, would run the first kilometre of the stretch, in support of her husband.

Probably overtaken by the hype, she found herself covering over 70 per cent of the track, with the weather on the day being kind to the runners as the day was generally cloudy.

But the crowning moment came with the Zomba City Mayor Christopher Jana who outclassed the runners by arriving at Gymkhana Club, the slated starting point almost an hour before he led out the team up to Six Miles. He also issued a K50 000 personal cheque towards the cause.

From then on, it was serious business.

The team, that ran the stretch for close to 12 hours, was joined by several other runners, including another female journalist Winnie Botha –also from MBC- along the way.

Pasungwi, who has sustained injury during practice a week earlier, opted to limp the whole race rather than get a ride in one of the escort vehicles. Such was the zeal in the runners.

“I woke up thinking that people are there to support me run for Ntchisi mothers. I was wrong. It clearly appeared to me that I was the one supporting the others. The lads were determined and they have been key to me running the entire race,” said Mphepo as the team finally crossed the finish line at Hotel Victoria.

NPL Deputy Chief Executive Officer (DCEO) Alfred Ntonga was visibly awed by the feat, by both Mphepo and the journalists.

“Honestly, I feel this is the best embodiment of patriotism. These runners have defied all the odds to complete the run. To think that they did it for others –probably unknown to themselves- speaks volumes of how determined to be agents of change the team is. I just hope many others emulate their selfless deed to help change Malawi for the better.”

Speaking at the same function on behalf of the MFR’s corporate partners, United General Insurance sales and marketing manager Sungeni Chiligo said his company feels “challenged” by the feat, urging the population to do more for its country.

“We find NPL’s commitment to the initiative very amazing; something that needs to be emulated and encouraged by all. We feel Malawi can become a better place for all if everyone does their earnest part in alleviating challenges facing our communities, who also form our customer base. To have an ageing Mphepo volunteering to run for Ntchisi mothers is another issue that moved us to do something about it,” he said.

NPL, alongside its MFR strategic partners, will deliver all the mobilised resources to the beneficiary Ntchisi District Health Office on October 13 this year.