When girls operate from hostels

Before Makande Community Day Secondary School (CDSS) boarding hostels were rehabilitated in 2013, girls used to walk as long as 16 kilometres to the school.  This distance is enough to make a girl drop out given the challenges encountered on a daily basis.

Chikondi Chokha is a Form Four student at Makande CDSS. She too has had to endure walking long distances just to get to school. She recounts her ordeal: “I had a bicycle and so it would take me at least one and a half hours to get to the school, but it was not easy because I would leave home around five and get to school at around 6:30 am. I got here tired and so it affected my concentration.” Chokha further says some of her friends whom she started with in Form One dropped out due to distance and other hindrances.

“Two were married, but are longing to get back to school since the marriages are now broken. But it’s not an easy thing and it requires perseverance. At one point I also saw no reason for me to continue,” she said.

Another student, Marita Divala, who is 17 and in Form Three, also narrates her ordeal. She says before the hostel was identified by government and UNFPA as needing rehabilitation, girls were faced by many challenges.

“The initial building was in a poor state. It had no windows and no kitchen. Since the hostel is near a foot path, thieves were the common visitors. It was not safe to be in such a hostel. In addition, girls were cooking on their own, and the food was unhygienic,” she explains.

After the renovations, Divala transferred to the hostel and sings the glory of operating from within school. A study by government and Unicef Basic Education programme reports that Malawi still faces a high dropout rate due to a new set of constraints, which include long distances to school.

One of the teachers at the school, James Ebere, says since the hostel was renovated under the Gender Equality and Women Empowerment (Gewe) programme, girls enrolment has almost tripled.  Ebere adds that despite the challenges faced by students are the same, girls’ chances for not completing education are very high.

Argues Ebere: “Since most of these students have very poor backgrounds, men easily entice them with money and other things; hence, they fail to continue  with school. Imagine a hungry student being offered food, how long do you think that can continue without a pregnancy? And the distance makes it even worse.”

He further says there is an improvement in girl’s performance, since they have enough time to study.

Gewe efforts complement government initiatives in ensuring that there is a 60/40 representation of women in leadership positions.

“Despite that the Gender Equality Act was enacted in 2013, there has been a delayed response on the implementation part of it. Nonetheless, let it also be known that this is a new thing and will need massive support from all sectors for institutions to begin to implement the 40/60 gender balance in their workplaces. This Act will also go all the way to institutions of learning. We want its impact to begin from the bottom all the way to the top,” says Msiska.

Minister of Gender, Children, Disability and Social Welfare Patricia Kaliati hails the European Union funded programme for the positive impact it is making on girls. She says there is almost a 30 percent gap between the girl and the boy child in terms of access to education.

“By promoting the girl, we have not abandoned the boy, but we want to simply narrow the gap so that they move together. Otherwise, we are aware that if we continue with the girl there might come a time when girls are too educated than men, and we do not want that and we are mindful of that,” says Kaliati.

Implementing partner for the Gewe programme in Chikwawa, Catholic Commission for Justice and Peace (CCJP) mobilisation officer Felix Mbua says: “Girls in Malawi have to overcome a mountain of problems if they hope to complete their education and by renovating the hostel and building a kitchen. A mountain of problems were addressed. This is indeed a positive step.” 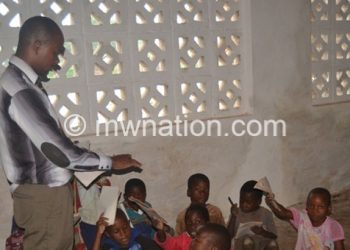