Who are parties’ benefactors?

Judge Mbadwa: I will allow Mr Mzika Yeniyeni to make his submission why he wants political parties to disclose their income.

Nzika: My Lord, I have heard a lot of noise about the wind of change blowing across the nation and my hope about the future of Nyasaland were raised.

But before I show allegiance to any political organisation, I want this court to force each one of them to declare their source of income regardless of the fact that, in the absence of an enabling Act, parties are under no obligation to disclose their source of money.

I am aware that the Political Parties Act, which was passed by Parliament, is yet to become operational in Nyasaland, which means that these politicians have a free rein to court the devil to finance their campaign and that is my main source of worry.

The People’s Demagogic Party (PDP), Lazaro’s cockerels, the new kid on the block, the Unified Transgressors Mob (UTM), Chairman’s Yellow Group and of course Chipani Cha Amayi, and many insignificant others, have been outwitting each other on the political platform, claiming they are the holiest of the holy who should  be entrusted with running our country.

My Lord, I don’t trust politicians because honesty has never existed as a word in the vocabulary of politics.

Now, if PDP is better than Lazaro’s cockrels or UTM is the new broom that sweeps clean, why aren’t they telling us where they are getting the money to finance their campaigns?

My Lord, I have reason to believe that all these groups are funding their campaigns with tainted money from some business gurus with a promise of giving them business once ushered into power.

Mapuya’s PDP is a typical example of a party that is financed by business magnets and we don’t need more evidence to show that it is mired in dirty money. Why did PDP reluctantly return millions of kwacha to a donor after a public outcry that it was dealing with suspected proceeds of crime? By the way, who are other party donors who deposited into an account that Mapuya is a sole signatory?

Lazaro should not claim to be a saint in this either. Who are the father-Christmases funding their flamboyant campaign trails? Well-wishers? No, it can’t be the Lower States benefactor alone financing everything.

My Lord, Lazaro, too, should declare benefactors of the party before he coaxes people to trust him to bring a wind of change.

Speaking of UTM My Lord, I expected Sauli Cloud and his cronies to be more open in their dealings now that they have exposed how deeply entangled PDP is in corrupt practices.

My Lord, the assumption is that UTM being clean, they cannot finance their rallies with stolen taxpayers’ money but I have seen that they have party paraphernalia of good quality and fleet of cars, which were not declared to have been sponsored by any member; were they saving money during their incarceration in PDP in anticipation of the new movement? Where was the money coming from?

I would go on and on about Chipani cha Amayi and Chairman’s Yellow Group, the bottom line is, all these parties are funded by some demons that stay masked by the parties themselves.

They shouldn’t tell us crap about fundraising initiatives such as Cockerel Night, Blue Moon, and Yellow Fever because those cannot raise enough to fund three mega rallies.

My argument, therefore, is that if the electorate would be able to know where these politicians are getting the money they are throwing to woo the electorate, the masses would have reason to vote for leaders who can allow to be held to account on everything, including party funding. Thanks you My Lord.

Mbadwa: I will have to make a determination on this matter next week, but I agree that parties become involved in illicit financial flows the moment they decide not to disclose their sources of income. 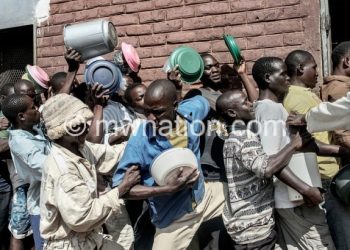