Why educated Malawians are not rich

Long time ago I remember my mum insisting that I be in school. There were times, during my early primary school years, when I would call it a day once it was break time. The moment the ‘go for break break’ song went, I would think it is time for going home. But the moment I saw my mum at home, I would know I am going back to school—she would literally drag me back there. Why? She would say ‘Sukulu mbusambazi mwana wane! (Education will make you rich)’. Through years of encouragement, I developed a strong passion for school and endeavoured to reach the furthest of its heights. But am I rich? May be its too early to ask!

Why bother impressing other people?

When your partner is a debt trap

Living a happy life with or without money

The question for the week is: why are most educated Malawians not rich? I am mindful that ‘educated’ is a relative term so in this context I am referring to those with first degrees and above. I am also mindful that the issues may not only apply to the educated—so lessons apply across board. However, my interest for the week is on the ‘educated’. I have thought long and hard before coming to the conclusion that there are six main reasons why educated Malawians have usually failed to make it onto the rank of the ‘rich’ list.

First, most educated Malawians are not as ambitious. They set themselves too low targets and easily get satisfied with what they have achieved. The yearning for more challenging achievements fades off quickly. Once they have a car or two, and a nice house in some of the low density locations then they think they are there. They fail to dream in colour owning skyscrapers, farms, etc. The solution to this problem is simple—stretch your imagination further. You will be shocked on how much potential you have. You can achieve so much more than you think.

Second, Malawian universities train students for employment as an end in itself not as a springboard for starting their own enterprises. Solution —Universities and colleges need to have a component of entrepreneurship in every degree/diploma programme. Something like: ‘How to start and grow your own business—challenges and opportunities.’

Third, most Malawians lack capital for starting up businesses. In America, Europe, and the Far East, one can easily walk into a bank so long they have bankable business ideas and they are given start-up resources (venture capital). Matter of fact, there are even TV programmes running to encourage innovative business ideas. Banks should go beyond looking at individuals’ present collateral and look at their potential instead—this would create a win-win solution to both the banks and the individuals. As it is currently, lack of financial start-up resources suppresses brilliant and innovative business ideas.

Fourth, educated Malawians are so risk averse. Just the thought of being on their own without pension, medical cover, no consistent flow of income sends shivers down their spine. Interestingly, when your company gives you a bonus of say K1 million kwacha at the end of the financial year, what the company is simply telling you is ‘you are making us lots of money, and we wish to kindly let you know that you are stupidly blind because this money could have been all yours if you had your own company’. What Malawians forget is that taking the risk will involuntarily make them work so hard, be wiser and innovative than they could ever have imagined. Sitting in comfort will never drive you to innovation and success.

Fifth, when educated Malawians start making some money through a small business or through their employed jobs, they start to spend off their surpluses faster without allowing them to build up. A Malawian who gets a bonus of K1 million kwacha will fly to Dubai or Japan to buy a vehicle instead of saving the money for some investment. Malawians, men particularly, love to show off and womanise when they get up just a few steps the money ladder.

Lastly, most educated Malawians throw the Bible or Quran to the wind once they start getting more money than they imagined. Their lives start being built on vices than virtues. They easily lose focus of where they wish to be. Their families stop to count and their friends’ ideas take centre stage instead—most of which can be myopic and misleading. Witnesses abound of former Students Christian Organisation of Malawi (Scom) chairpersons who have now mastered the art of skirt-chasing and befriending the devil in arrears. They then die young than the already low Malawian life expectancy.

If only the educated Malawian could read this! They and theirs would have a blessed future.  n

Nocma yet to commission fuel reserves 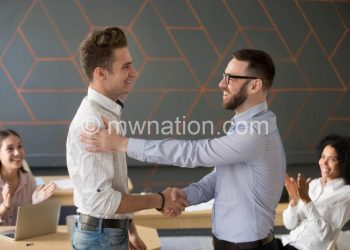 Why bother impressing other people?

When your partner is a debt trap

Living a happy life with or without money