Will they know it is Christmas?

Honourable Folks, come Tuesday and it will be Christmas Day, the climax of the festive season which also heralds the New Year.

No wonder, the festive mood normally catches on pretty early in December, with Santa and Christmas tree images decorating major shops and supermarkets, a marketing gimmick that triggers shopping madness in us as if we owed Jesus Christ, whose birth is commemorated on Christmas Day, a new pair of jeans and a chocolate bar.

On radio and TV, most adverts use carols for jingles even if what they are selling is beer which, if you were seen buying and drinking by a Presbyterian pastor, trust me, you will be excommunicated at the next session of elders.

The reality is that to Christians and non-Christians alike, Christmas means  everything packed in  the festive season—shopping binges, special foods and drinks, increased crime, reckless spending, increased frequency of road accidents and, of course, the Christian celebration of the birth on earth of Christ the King.

So, if you are as poor as the church mouse, the celebratory part of Christmas may turn out to be a tantalising window-shopping experience. You will just stand there and admire others as they push trolleys in shopping malls full of stuff to consume during the festive season.

You may go to church in the morning of December 25, pray, sing Christmas carols, watch children perform the Nativity—nothing much more than the usual Sunday service—but, when you step out of the sanctuary, you realise you are on your own.

The pastor will quickly change into casual wear and start preparing the charcoal burner. It is time for barbecue of chicken, beef, pork or goat meat that will go with rice, potatoes, nsima or indeed all these in one plate. It is Christmas, stupid!

No wonder, many organisations pay December salaries a week or so before December 25. Some even add a little extra or even the famous thirteenth cheque and send staff on holiday for a week or two.

Well, this year many deserving Malawians have been denied the right to spend like mad on Christmas. Not only are jobs scarce as economic hardships force companies to scale down operations or close outright, but even the lucky ones who still  have their jobs wake up every day to realise their incomes cannot fetch what they could the day before!

Political madness that followed the six years of sterling economic growth during the Mutharika era put us all in this fix. There had to be massive devaluation of the kwacha and the adoption of other painful fiscal and monetary measures just to bring back donor confidence into the economy.

Things would have been much worse had the JB administration been as stubborn as Mutharika’s. Reason? Whatever go-it-alone solutions for turning around the economy there were, they needed funding which we simply didn’t have. The zero-deficit budget left us with very little to live on let alone invest in wealth-generating ventures.

But do politicians, especially those who worked like zombies with Mutharika, know that our suffering today is a needless heavy price we must pay for the mistakes they made? Does JB know that any serious blunders her government may make now will exact a heavy price on innocent Malawians, particularly the poor, in future?

More importantly, do Malawians realise that when those elected into government mess up, it is the ordinary citizens who pay the price? Do those who, with parched throats and chapped dry lips, sit and watch as Christmas passes by this year know things would have been very different for the majority of Malawians?

You may ask: why, all the fuss just for Christmas? The answer is that in good times, we would spend senseless during the festive season only to struggle with school fees, fertiliser and General January later.

This year, Christmas is bleak and its aftermath will even be worse. Fees is rising by the day, fertiliser is at K16 000 a bag and food and other essential items will in January be more expensive than they are right now when we can’t afford to buy and spoil ourselves in the spirit of Christmas.

The lesson from all this is that elected leaders should not play God and the electorate should be a little more critical of their leaders, always ensuring there is transparency and accountability. Otherwise, leaders will come, promise us heaven and leave us more miserable as has always been the case since 1994.

Solace may lie in the fact that the Son of God, the King of Kings, whose arrival on earth we commemorate on Christmas Day, did not even have the comfort and luxury we so much crave. He was born in a manger, son of a carpenter and did not even have a mule of his own. His triumphant entry of Jerusalem at the end of his mission was on a borrowed mule.

Maybe, just maybe, we will be more blessed this year as we watch Christmas  pass by while famished and in excruciating poverty. Still, Merry Christmas Honourable folks, our God does not sponsor a flop. 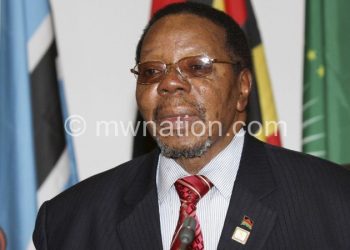