The recent voter registration figures have sparked fears that next year’s polls might be hit by voter apathy in some parts of the country.

While Malawi Electoral Commission (MEC) chairperson Justice Jane Ansah and her team have work cut out for them to convince some folks that we should participate in this election, it is not hard to understand why some folks don’t have much of an appetite for the elections. 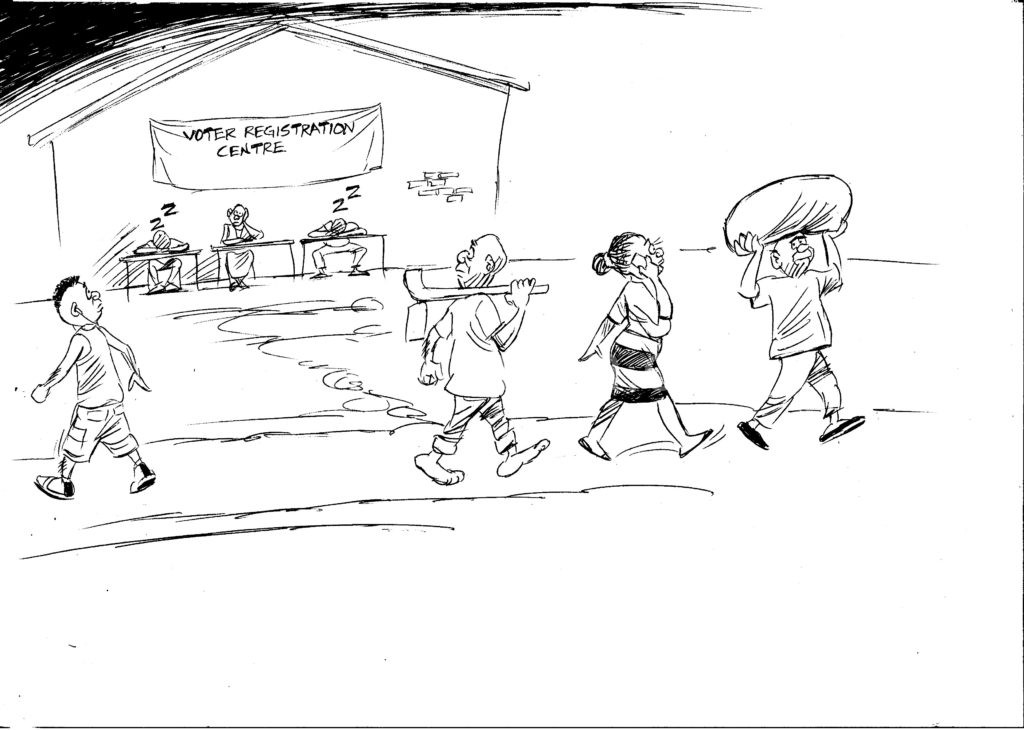 Travelling across the country—both town and countryside—you hear tales of ordinary folks telling off those in power and sharing frustrations about the failing democratic experiment. Many a potential voter feel past elections have done little to bring real transformation in their lives.

Many people will vote because they realise just how important voting is. Many people realise the power of their votes and still harbour a lot of hope that elections can bring change.

But they are also just too many people fast giving up on both elections and the country. This dawned on me quickly as I recently travelled on a reporting tour to some parts of the Central Region.

Of course, the reasons some folks threatening to skip the elections vary. But they eventually point to one common aspect—a big disappointment in the system.

It’s a potential flashpoint for our nascent democracy. It’s also a tragedy as democracy has failed to uplift millions of people out of poverty.

The promise of democracy is being eroded by bad governance. Even when you travel to rural areas, where unlike urban areas people don’t read newspapers or use Facebook to express anger over bad governance, in their own diction, people are making grave indictments of our democracy.

Often, the substance of their grievances is this: Our democracy has been hijacked by corrosive cancer of corruption. Yes, even the rural folks, even when ignorant of lofty terms such as inequality, can still tell you that the rich are getting richer, and the poorer are getting poorer.

Election after election, same rich people, driving same big cars, come and beg them votes; promising the moon and temporarily sharing the burden of their immediate needs and wants; coffins, T-shirts, bags of maize, school fees, football trophies and other forms of entertainment. But once the elections are over, the rich disappear into their comfort zone, often far away in town.

Meanwhile, they—the poor and voters—grapple alone, struggling to feed malnourished children, most of them whom die needlessly before the age of five—thanks to preventable diseases.

They drink from dirty water sources. They fail to educate their children beyond the free but underfunded primary schools. And they see, right in their eyes, the vicious circle of poverty trapping them, from one generation to another.

This is why those in rural areas may not see the excitement of registering to vote. Indeed, many who even registered, as some folks told me in Mchinji, are only doing so to get the national ID to use in other businesses. Some folks just want to go on with their lives, elections or no elections.

Now, when you get to town, there are people mad over how most people they vote for in office are plundering their hard-earned taxes— not just on vanity projects or poor planning or inefficiency, but because of wanton embezzlement.

When you get to this point, then you will realise why in a campaign where there have been a few big ideas, where most of the parties are featuring recycled politicians (think Sidik Mia for MCP, Chilima’s support cast featuring Patricia Kaliati, Noel Masangwi and Callista Mutharika, and yes, same old DPP), few people are genuinely excited about the elections, or the future.

Not that those planning to boycott elections are right or justified but their rationale is understandable. The system has let them down. However, the job for busybody folks like me, Ansah, and the political players themselves seeking the votes, is to convince people whose hopes have been shattered for a long time, that it’s actually in voting, again, that their nightmare might end. And that’s a tough sale.

Home-boy politics not fit for leadership

It is raining honorary degrees

It is raining honorary degrees