Women in drive to end hunger

Gender analyses provide a deeper perspective of the intersections between gender and food security and they conclude that food shortage is a gender-based violence (GBV) of sorts.

Elizabeth Trapence, 24, from Madyeratu Village in Traditional Authority (T/A) Chanthunya in Balaka concurs that when hunger strikes women and children are at the receiving end.

“Almost 85 to 90 percent of the population in this area experiences hunger every year. Rain-fed agriculture is not profitable because of erratic rains and we usually are without food for most part of the year.

“Usually, men abandon their families when hunger hits harder or they spend the day slouching about the village watering holes, leaving women and children suffering,” she says.

Trapence says it is sad to see poverty-stricken women and children walking from one village to another in search of green mangoes or piece-work to buy food.

Alinafe VSL, which merged with two other groups to form Alinafe Cluster and has a membership of 27 women and seven men, is chaired by Chisomo Hadiweki.

She says in some cases, women and children are pushed to extremes of hunger that they are reduced to eating zikhawo (wild tubers).

“Despite that our cluster was already into irrigation, the challenge was that due to extreme drought experienced, the shallow wells we used could dry-up before crops matured,” Hadiweki says.

She says because of extreme hunger, social ills such as failed marriages, child malnutrition and women engaging in prostitution are rampant in the area.

After appreciating the problems women and children face because of persistent hunger, Wolrec decided to promote the irrigation initiative by procuring a solar-powered irrigation system which will enhance the women’s food security drive.

He said: “We are implementing a project in T/A Chanthunya aimed at empowering women economically through irrigation with support from IM Swedish

“Development Partners. Alinafe Cluster was already doing irrigation farming and showed interest by buying over one hectare of land with VSL proceeds.

“After appreciating the cluster’s efforts to deal with persistent hunger which was impacting heavily on women and children, Wolrec decided to help enhance their farming by funding a modern solar-powered irrigation scheme.”

Kambewa said the development was community-demanded and not imposed by Wolrec, demonstrating the women are poised to ending hunger.

“Alinafe Cluster solar-powered irrigation scheme is essentially run by women who suffer the most during food shortage. This will fully ensure there is food security at community and household level,” she said.

Chuma said Balaka is prone to drought and receives less than average rainfall, but solar-powered irrigation, especially from groundwater sources, can end hunger.

“Gender equality hinders women from accessing education making them more likely to suffer from poverty and hunger together with children, since they shoulder the burden of caring for children.

“A majority of women engage in farming to feed their families and are a powerful force capable of feeding communities. Assisting women with solar-powered irrigation systems is a great move because women need resources to improve their livelihoods,” she said.

T/A Chanthunya admitted women and children suffer the most during famine, quantifying it to be gender-based violence as most men run away. 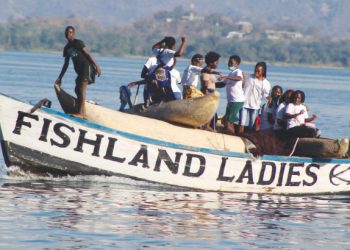