by Nation Online
in Feature of the Week, Front Page
5 min read
0
Share on FacebookShare on TwitterShare on WhatsAppShare on LinkedinLinkedinShare via Email

Malawi’s trees are disappearing faster than they are being replanted.

The fast-growing population’s appetite for firewood, charcoal, farmlands and housing pops clear along the country’s roads.

Locals in the border strip along the Mangochi-Ntaja –Liwonde Road murmur about the ‘chaotic 1980s’ when the hilly setting received thousands of Mozambicans fleeing civil war.

“Amid population pressure, we raided the hills for firewood, new crop fields and homes. In no time, there were no trees left and rainwater gullied the hillsides, washing away fertile soils from our fields into the streams,” recalls Frackson Makombe, from Thom Village in Machinga.

After the refugees’ repatriation in 1994, Malawians scrambled for the remaining trees until concerned women demanded a swift stop.

“The dense forest started returning after some women approached village heads surrounding the mountain to persuade people to keep their hands off the stumps so they could sprout again,” says Makombe, chairperson of Nsakaru forest protection  group.

By 2002, they had planted about 4 000 trees in Nsakaru Mountain, the greenest of the hills in the terrain where standing forests mostly remain in gravesites. Its thick green cover testifies to strength of the women as stewards of nature, proclaiming how collective efforts help repair the degraded landscapes.

The lush caught the attention of policymakers in 2003 when the government started offering community members K700 a month for clearing the weeds and making firebreaks in Nsakaru Forest.

“After the three-month public works programme expired, 113 out of the 350 dropped out. Only those who appreciated the importance of trees continued,” he recalls.

“These 198 women and 39 men continued weeding, leaving the shrubs to grow while creating firebreaks. In 2014, we started to replenish the trees in nearby Sonje Hill. It is bigger than Nsakaru, but it was barer,” Makombe explains.

In 2014, the National Smallholder Farmers’ Association of Malawi (Nasfam) contributed 1 000 seedlings to the reforestation of both hills as trees cool the planet, refresh the air humans breathe, and slowdown running water that wash away topsoil farmers use.

“Nasfam didn’t only give us seedlings but also vital tools such as slashers, axes, wheelbarrows and 7 000 tubes for tree nursery. The support encouraged us to do more,” he states.

The forest stewards have deployed four youthful guards who conduct patrols day and night to combat theft and bushfires.

“Now destroyers fear to invade the mountain forests because those intercepted pay fines which we use to pay the guards’ stipends,” Makombe says.

And the community is reaping more benefits than just mushrooms and wild fruits sold at K1 000 a plateful.

Lonny Mmeya, who grows maize and groundnuts, says: “We now get good rains and the gullies in our fields are disappearing as the green cover slows racing rainwater.

“As crop harvests are increasing, our children are learning from us to value trees.”

The reduced loss of fertile topsoil and increased rainfall help the farmers beat hunger and poverty.

Sitting in a tree shade, Ellen Dailesi, from Pose Village, can afford fresh air and hope for a better future for her three children.

“While working in our crop fields, which were hugely eroded and barren, I tell my children: ‘Let us plant trees and take care of them because the future will be bleak if we continue destroying forests as many Malawians are doing,’” she states.

For the rural farmers, trees have become a matter of life and death.

“When one dies, we donate timber from the forest for making coffins and firewood for cooking communal meals. Due to this, many people now take part in safeguarding trees” says Jimmy Chigwanja, from Magwede Village.

The forest defenders also use the trees to construct public buildings such as classrooms at Sonje and Nsakaru primary schools, where learners used to learn in the open and  in overcrowded blocks.

They also use Chitetezo Mbaula, a handmade cookstove known to almost halve the firewood and smoky fumes from open fires. This reduces the frequency they raid forests for fuelwood.

Akbar Mlewa elaborates: “With fewer trees burning in fireplaces and more being planted and growing, rains no longer dribble past our area.”

This is a big win for the maize farmer. For the past five years, he has been harvesting 40 to 50 bags from his one-acre field that produced less than 20 when the trees vanished.

“With enough food and surplus to sell, we have peace of mind and good health. We no longer waste time queuing for relief maize or jostling to buy grain from Admarc. Those who do not have maize buy from us,” Mlewa brags.

Music misses out on Flames’ exploits 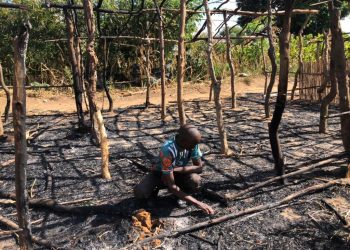