The inaugural Sand Music Gospel Festival held on Saturday afternoon at the Lilongwe Golf Club was exceptionally lit despite the low turnout of fans.

As expected, looking at the line up of performers, this was a show every gospel fan should have attended. But it was never to be as only a considerable number of music fanatics turned up. It would appear despite the great hype created before the show, heavens had other thoughts.

There were adverts on TV, newspapers and billboards along the roads all hyping up the show. But in the end, a huge turn up was never achieved.

Incredibly, the low turn up did little to dampen the mood of the show as party goers lost themselves in merriment of the gospel show’s great vibes. And, the performers were in their true top elements; undeterred by what was considered a low patronage to a show of such great musical acts.

And for the people that witnessed the show, they got what they wanted from a rich line up of cream of African gospel stars.

From South Africa’s musical great Sipho Makhabane to Nigeria’s Jimmy D Psalmist to Malawi’s Ethel Kamwendo-Banda to Uganda’s Levixone not forgetting Namibia’s Marathana and local hip hop star Suffix. They were all there to dish out the vibes. The line up also extended to Lucius Banda, Shammah Vocals, Wendy Harawa, Lulu, Rudo Chakwera and Swazi from South Africa.

Those that graced the show went home happy, having had their musical appetites whetted and satiated.

Many people have known Sand Music Festival for bringing secular artists and most of the times for hosting the show at the lakeside. This time, the event was different.

They brought together gospel artists from Namibia, Nigeria, Kenya, Uganda and Malawi as hosts in the capital Lilongwe.

During the show, patrons were greeted by local gospel heavy weight Shammah Vocals, popular for his song No Reverse.

Then it was the time for Suffix to perform on the stage.

He performed various songs which included Ndikanakhala and many people gave him applause for his massive performance.

Next to perform were DJs. The artist handed over to DJ Easy Samuel from Uganda who sent people into a frenzy with his top notch dee-jaying skills on the turn table.

Fans also enjoyed the great performance of DJ Mo from Kenya and DJ Mighty Virus from Malawi who performed various songs from Malawi and beyond the borders.

Despite the great performances from both DJs and musicians, the show ironically received a lukewarm patronage despite having a good line-up for international and local artists.

In an interview with Society, a cross section of festival goers, many gave mixed reactions of the main reason for the not so good turn up of fans.

One fan Honest Komiha from Area 23 said that the show received poor patronage due to the selection of artists.

He said: “The organisers put artists like Sipho Makhabane, Jimmy D Psalmist. I have known Sipho since I was in primary school and we have been listening to his music for quite good time. He is great, but now he has no any new hit songs.”

While some were of the view that perhaps gospel music has lost steam to secular music others had other views.

“There was a show recently here by Mlaka Maliro and it attracted a big turn up so we can’t say gospel lovers have begun shunning live gospel shows. Probably people had no money,” said another patron Kenneth Phiri from Chinsapo.

Others who also left a mark during the show was veteran Balaka-based  Lucius Banda.

After Soldier’s performance, it was another legend Ethel Kamwendo-Banda who jumped on the stage with her hit song Ndi Umboni. She also performed Mwandikondera and many other songs.

“The performance was great and massive… how old is she?” asked one of the hosts from Uganda Lady Bezo to the patronage.

Other hosts during the show were Super DT from Mibawa Television and Lady Thumbie from Rainbow Television.

Then it was time for the first international act on the stage. Swazi from South Africa who mesmerised the ecstatic fans, giving nothing but the best of her.

Another international act, Maranatha, all the way from Namibia, lit up the stage with her praise and worship songs before Levixone from Uganda jumped on the stage and performed various reggae songs, though some patrons again looked unfamiliar with the songs.

He then shocked the patrons when he performed a popular local song Kunyumba Ya Atate.

Levixone then invited Wendy again on the stage to perform Zikomo.

It was the time for one of the headliners, The Nigerian award-winning artist, Jimmy Johnson, popularly known as Jimmy D Psalmist.

He performed songs like I Surrender, Great and Mighty, Power Of The Blood, Great and Terrible and patrons were able to sing along.

Then apart from the music, Psalmist also prayed for patrons.

After satisfying his fans with an energetic performance “The Big Fish” as he is called in the music industry thanked patrons for what he described as a warm welcome during his performance.

At the end of the event, a patron Vanessa Nkhoma was full of praise for both local and international artists and organisers.

“This is what a festival should feel, flow and vibe. I love it.” she said.

One of the organisers Peter Nkhwachi Mhango said the festival was introduced to bridge the gap on the platform between gospel and secular artists.

Mario gets a year  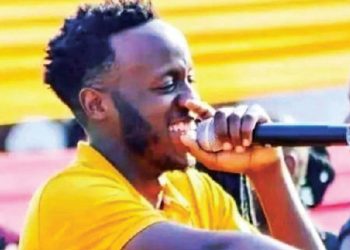 Mario gets a year